It had been raining–the day last week when we went to San Francisco with our friends, Don and Abigail O’Keefe. When in their garage we had entered the car, we carried umbrellas with us, and I saw as we 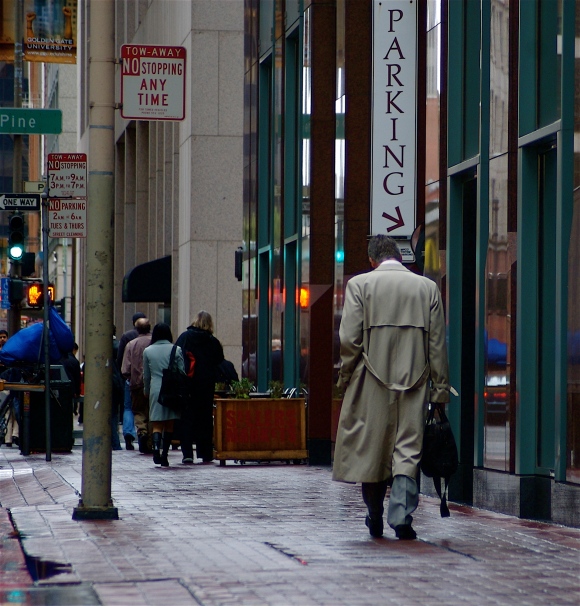 viewed the people walking the city streets, that some of them also had umbrellas in their grasp.

Others did not. I viewed him in the wet and dreary distance as we walked toward Pier 39, and saw that as person by person passed, he would extend his bare head (though covered amply with thick black hair) from the folds of his vivid bag, and in a voice that rang unexpectedly cultured and strong say, “Have you anything for an Irishman? An Irishman who is a veteran?

Have you anything for a veteran?” A small patch of coins lay on the cold pavement before his huddle, except that I see in the picture the coins are not visible, so perhaps he swept them inside his tent when he withdrew his head, I’m not sure.

His immediate image was colorful, but in my mind the image was scribbled with gray smudges, for once this pitiful man had been a mother’s newborn baby, and now he was a sad victim of the street.

I’ve heard the arguments–valid ones, I suppose–that here in America it really is never necessary for a person to live in this manner. There are numerous shelters and welfare programs. True enough. Yet the vision is a sad one. Whatever has caused this human being to live in such a way–whether it is his mindset, his laziness, his true disabilities, our wretched economy, his addictions–whatever, it is sad.

It is especially sad during this holiday season…for not far from this spot are spangled Christmas trees and smiling people with gift packages in their arms. They have dressed well for the day, now walk about the bustle of the twinkling shops, and then will  scurry home to their warm places and to their beautiful families.

Carols sound joyfully over the splendid scene: Silent night, holy night, all is calm, all is bright…