A few days ago when the mobile repairman adjusted our brakes, he told Jerry he thought there was a problem with one of our tires. . .Jerry checked suppliers yesterday, and this morning a mobile tire truck would arrive, check the tire, and install a new one if such was needed.

“Think I’ll do a bit more shopping while you wait for the tire man.” I smiled as I made this little suggestion to Jerry at the same moment as I checked on my computer for store hours of Dillard’s Clearance Center. Open at 9:00 the site read, so a few minutes after the hour I pulled in front of the huge store. Nothing. Quiet. No one there. I walked to the door and saw the posted schedule called for the store to open at 11:00.

There was a Ross nearby and a Barnes and Noble, and I thought to hang out at those places until 11:00. I called Jerry, told him what was going on…and went into Ross’s. I had been poking through the dresses for just a few minutes when I saw this! What? It was a cute little summery thing–very pretty. A clerk was passing and I asked her. “Is this dress 49 cents?”

She smiled and said, “Yes!” 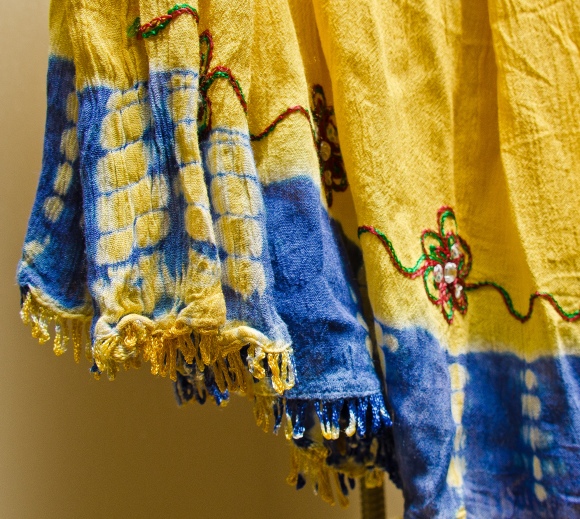 I looked around Ross’s a bit more, but finding nothing else I wanted to buy, I headed for the cashier, having a slight sense of embarrassment at buying nothing else. “Biggest sale of the day, I’m sure,” I said to the friendly clerk.

She smiled and explained. “Happens occasionally. If something doesn’t sell for a month or so, drastic reductions are made.” She punched buttons on the cash register and said, “That will be fifty-four cents.” I paid her with two quarters and four pennies.

Well, the thoughts of this buy and the bargains I snagged yesterday at Dillard’s have led me to this decision: If I were a gambler, I would head straight for Las Vegas. 🙂

Edit: June 10 Someone asked to see the dress modeled. Here you go!