Of course we should not, in ostrich-like behavior, go searching for a thick mound of sand in which to burrow our bewildered heads,

nor must we dash to the corner eyeglass shop and there select the rosiest lenses to make up the spectacles we will perch atop our inquisitive noses. Without question we must stay informed, even to the acknowledgment of gloomy and dismal statistics that bombard our senses: With courage and judiciousness must we tackle the problems that face our country and our world. Indeed, our situation is dire, but no one need exaggerate its grim significance, nor needlessly swipe our minds 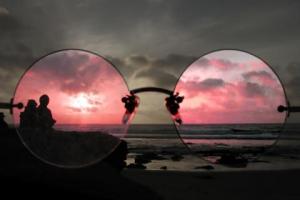 with gloomy and pessimistic brush, certainly not in the hope of thereby obtaining some political advantage. In recent days, President Obama has been accused of such action, and in response Mr.Bradley Shiller has written an excellent piece for the Opinion Journal. Read it, and be hopeful.

President Barack Obama has turned fearmongering into an art form. He has repeatedly raised the specter of another Great Depression. First, he did so to win votes in the November election. He has done so again recently to sway congressional votes for his stimulus package.

In his remarks, every gloomy statistic on the economy becomes a harbinger of doom. As he tells it, today’s economy is the worst since the Great Depression. Without his Recovery and Reinvestment Act, he says, the economy will fall back into that abyss and may never recover.

This fearmongering may be good politics, but it is bad history and bad economics. It is bad history because our current economic woes don’t come close to those of the 1930s. At worst, a comparison to the 1981-82 recession might be appropriate. Consider the job losses that Mr. Obama always cites. In the last year, the U.S. economy shed 3.4 million jobs. That’s a grim statistic for sure, but represents just 2.2% of the labor force. From November 1981 to October 1982, 2.4 million jobs were lost — fewer in number than today, but the labor force was smaller. So 1981-82 job losses totaled 2.2% of the labor force, the same as now.

This was reflected in unemployment rates. The latest survey pegs U.S. unemployment at 7.6%. That’s more than three percentage points below the 1982 peak (10.8%) and not even a third of the peak in 1932 (25.2%). You simply can’t equate 7.6% unemployment with the Great Depression.

Other economic statistics also dispel any analogy between today’s economic woes and the Great Depression. Real gross domestic product (GDP) rose in 2008, despite a bad fourth quarter. The Congressional Budget Office projects a GDP decline of 2% in 2009. That’s comparable to 1982, when GDP contracted by 1.9%. It is nothing like 1930, when GDP fell by 9%, or 1931, when GDP contracted by another 8%, or 1932, when it fell yet another 13%.

Auto production last year declined by roughly 25%. That looks good compared to 1932, when production shriveled by 90%. The failure of a couple of dozen banks in 2008 just doesn’t compare to over 10,000 bank failures in 1933, or even the 3,000-plus bank (Savings & Loan) failures in 1987-88. Stockholders can take some solace from the fact that the recent stock market debacle doesn’t come close to the 90% devaluation of the early 1930s.

Mr. Obama’s analogies to the Great Depression are not only historically inaccurate, they’re also dangerous. Repeated warnings from the White House about a coming economic apocalypse aren’t likely to raise consumer and investor expectations for the future. In fact, they have contributed to the continuing decline in consumer confidence that is restraining a spending pickup. Beyond that, fearmongering can trigger a political stampede to embrace a “recovery” package that delivers a lot less than it promises. A more cool-headed assessment of the economy’s woes might produce better policies.

Mr. Schiller, an economics professor at the University of Nevada, Reno, is the author of “The Economy Today” (McGraw-Hill, 2007).