Snow and ice, they grip and hold

the cold. Long days and nights
but close about

snow and ice will pack and run.
Away.

Part of the amazement is of me–my body, mind, memory, emotions. That I came fully formed from the simple love of my mother and father, and that now I too am a mother–of four magnificent beings who have beautiful bodies, minds, and spirits truly amazes me.

Outside my windows tonight the wind blows, and though even on sunny days I cannot see the wind, I know it is there, for it lifts tree branches and puts them down again as easily as I flag a silky scarf through the air, and it tears around the corners of our tall house and howls. I hear the wind. It’s raining too, soft rain. They had said there was only a 20 percent chance of rain, but we are of the 20 of the hundred tonight, the lucky ones. 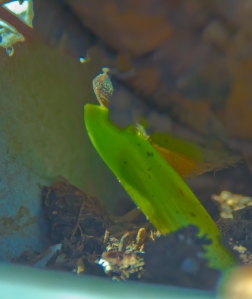 I imagined I heard rain against a bedroom window a while ago, so I peered out and saw that the driveway was wet and that the bushes that are illuminated by the yard light were shiny and drippy. “It’s raining, Jerry,” I said. It has been clear though. Just a few nights ago, the moon was so bright through our high uncurtained windows, I believe I could have read a book page at midnight. This early morning as we drank coffee I looked through the ascending branches of a wide oak tree just beyond our front deck, and there in the branch tops I saw the moon. It was not fat as before, but a fragment of itself.

It takes faith to believe in God and I have that faith. If I did not, logic would nevertheless pull me into the believer’s corner, for it is much more sane to believe that a Creator is responsible for the glory and wonder of the earth and for the beauty of our bodies and minds, than to think all this came from nothing and from no one.

Near our front entrance stairs is a large stone planter which in summer is a riot of flowers–annuals which I change out each year. In the late fall, I pulled out the remaining dried-up fragments and planted bulbs in there. I don’t remember what kind of bulbs I planted, for within a short span, Jerry and I planted 200 bulbs. But in a loose-leaf binder in the potting shed, I have a list of everything we planted, so I will find out what is to grow there. The potting shed is really not a shed at all, but is actually a basement room with an exterior 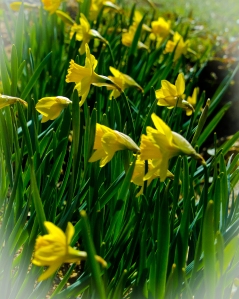 wall of glass and door. I call it a potting shed because it has pots in it, rakes, planting mix, the wheelbarrow, shovels, and such. But, back to the stone planter. 🙂 We’ve had record-breaking cold here in the San Bernardino Mountains this winter, but mixed up with days of very warm weather . . . so we have flowers blooming, even though it is projected that in a couple of days we can expect a storm to dump several inches of snow on us.

. . . the stone planter. Around Thanksgiving I piled on top of the dirt in the planter a mound of huge 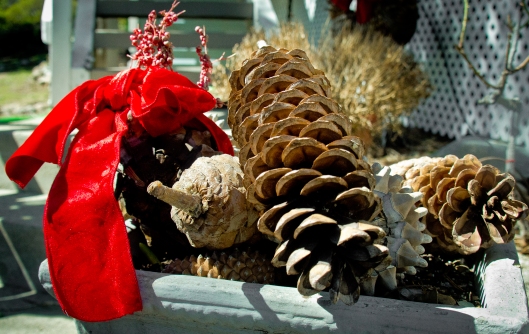 pine cones, and during the days of Christmas, I tied one of them up with a wide red bow. A few days ago when I noticed a sweep of blooming yellow daffodils, I got to thinking about the bulbs in the planter. I moved aside the heavy cones, and there poking up from the earth were determined, green shoots. 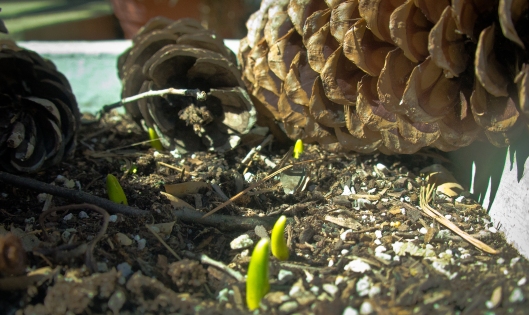 If there is anything that reinforces my belief in God, it is a flower bulb. They’re brown, wrinkled up, and papery when you dig a hole in the fall and stick them into the ground. Down inside those little morsels, though, is magic. Surprise. Determination. Plan. They know to push up when it’s time, They know to be a yellow daffodil or a pink tulip, or a lily, and though I’ll have to check my notebook to know, they already know who they are, and what they are to do. God made them that way.

It takes faith to believe in God. I have that faith and lots of evidence. Pieces of wonder.