“Because they’re your kids.”

After the guest speaker had finished, Michael went around the circle asking each of the students; “What did you hear from him?” and it was at this point that a lively, profitable discussion had ensued. The guest was Darin Craig, 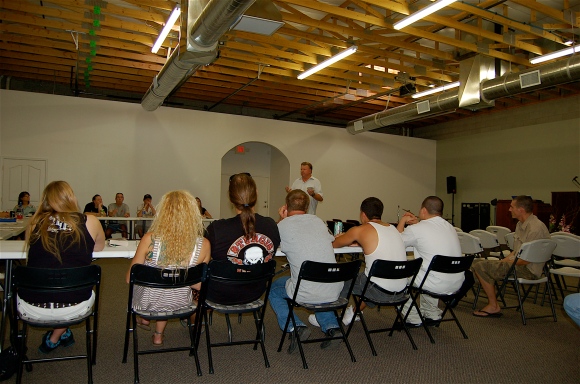 a local businessman whose only son has gone through a serious bout of drug addiction, and who had agreed to address our Christian Intervention groups as he spoke of a child’s addiction as seen through the parent’s eyes. The sessions were riveting.

It was the “tough love” issue that aroused lengthy and conflicting views. “Tough love” was not universally endorsed by this group and when it became so obvious, Mike asked for a show of hands. Interesting. About half of the group thought that a child could do nothing that should cause a parent to refuse to support that child. No matter what he does, he should always be accepted back in the parents’ home.

“Because they’re your children,” was the pointed, adamant answer of one young man.

I disagree, as do all the leaders of our group, our thought being there comes a time when parents must be tough, and say, “This behavior is not going on in this house.”After repeated tries, broken promises, defiance, law-breaking, jail time, drugs in the house, drunkenness in the living room–finally, a parent has the right (even obligation) to say, “No more.” Does that mean that parents no longer love the child? Of course not. A normal parent will love his child to the grave–no matter the behavior.

What say you? Are you a “tough love” proponent, or do you agree with many in our Christian Intervention program who say no matter what a child does, the parent should always take him in again, and again?