Being the organized slavedriver that I am, when the youngsters are here to visit they are all assigned chores, and I give them no money for tackling these little jobs. Not too many; just enough to help train them to pull their own weight. These chores include taking their dishes from each meal to the sink, taking care of their own rooms, making their beds, putting dirty laundry on the washer, and putting up their clean clothes after I wash them. At various times I add other little jobs that take just a few minutes after they have done their school work each morning.

Sometimes I pay, though, and Thursday was such a day. Eight dollars an hour were the wages for the boys; five dollars for Ella. They worked hard and deserve every bit of money I have paid (and in Ella’s case, will pay). One of our basement rooms was the object of our furious overhaul, and as I sorted and judged, they carried out items and/or stacked them neatly on shelves. We have hundreds of books displayed inside our home, and in this basement room we had boxes of others that we had considered discarding, but just could not take the step to do so. Now was the time. I refused myself the luxury of poking through these boxes, for I knew I would grieve at letting go of some of them, although Jerry checked through them after the boys had carried them out to be discarded. (I confess right now to have snatched from destruction  three books that were on the top of one of the boxes, and which now are lounging on a table in our bedroom.) 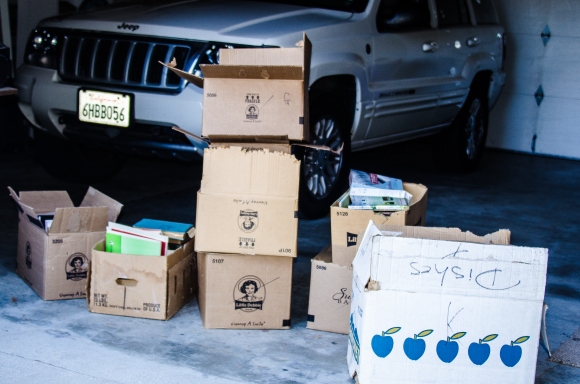 Brady wagged in a shop vacuum to take care of messy housekeeping by some of our vagrant mice families. 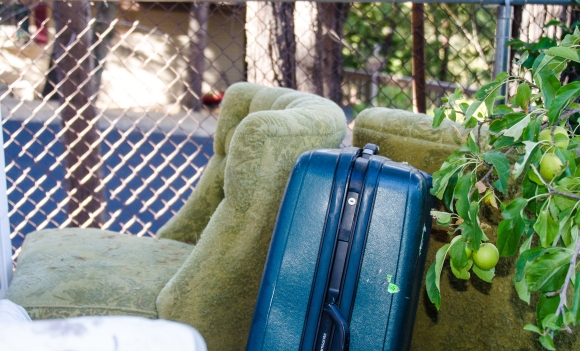 I can’t sew a stitch and don’t even own a working sewing machine, so it is quite strange that once upon a time I fell in love with these antique chairs and thought somehow I could recover them. In my mind I even picked out the material–a black and white glen plaid. They would be stunning in one of the upstairs guest rooms. Since the time of those regal dreams the green tufted objects have been mouldering in subject basement room, occasionally eliciting negative murmurs by the master of the house.

Out they went to the discard stack. 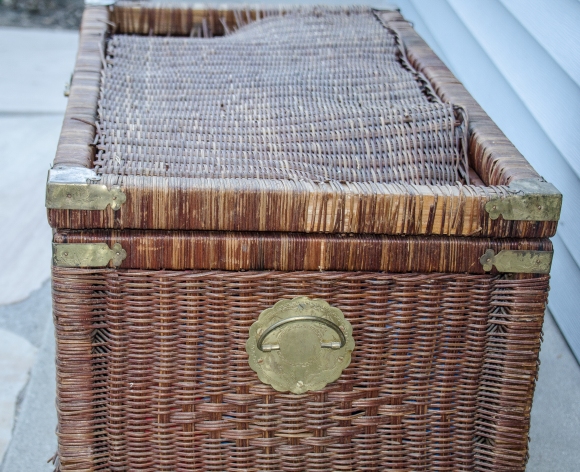 . . .as did this formerly handsome rattan chest, which now boasts a bashed in top, and was stuffed with winter jackets and snowsuits of all sizes. I sorted through the snow clothes, discarded tiny ones, and Cole lugged the rest of them into the house where I laundered them, then hung them on hooks in the garage.

After a milkshake break, and a half hour or so of work afterward, we were finished. Brady looked around, remarked how nice it appeared, and said, “We should have taken before and after pictures.” He’s right. We should have, but we didn’t

Jerry has spoken to Ken, our across-the-street neighbor, about borrowing his trailer. Tomorrow Jerry and the boys will hitch it to our Jeep, load up all these discards, and travel to the dump that is located over on Highway 18. Cool thing about our dump; a thrift store is there. So all the books, a stroller, a pitiful lamp, the beautiful green chairs, a huge suitcase . . .and such . . .will go the thrift store side. The rest? Dumped.