After the end of the short cruise we drove to Lake Havasu, attended our Sunday service, and by 4:00 in the afternoon we had pulled our rig onto the highway and were headed to Santa Maria, CA. for the Western District camp meeting. I cannot remember a better one. It was outstanding in every way.

The preaching was phenomenal, coming from Rev. Brian Kinsey the evening preacher and Rev. James Hughes the daytime preacher, and including four preachers from the district, in addition to Rev. Mullings who preached on Monday night. I missed hearing the Wednesday morning local preacher, but I can vouch for the others as being superior. Rev. Ed Allard was the Tuesday morning preacher and in a sincere, positive manner, he challenged us as Apostolics to take a careful and honest look at ourselves. “Has our gold turned to bronze?” He clearly asked for direction from our elected leaders. It was a powerful, courageous message, that resonnated soundly with the congregation.

The teaching and preaching by Brother Hughes was profound.

One problem existed: For the first time I can remember, none of my children, grandchildren or great-grandchildren were with us at camp…until Thursday evening when in came Chris and Christina and their two youngsters. 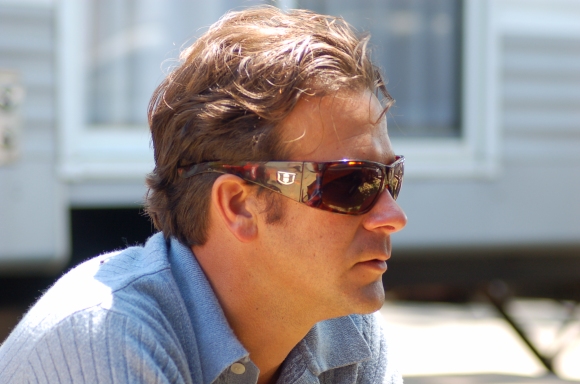 Friends ministered to each other. 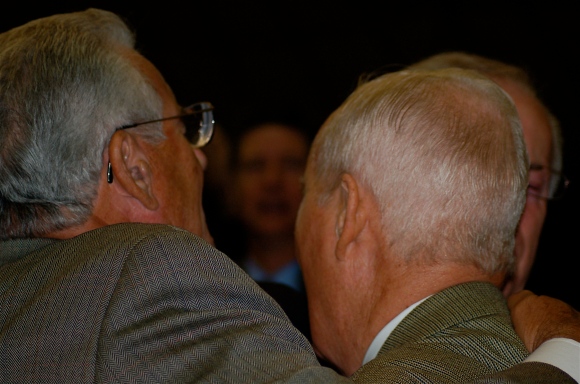 Families reveled in the presence of God.

New dedications were offered up to our God.

Family Apostolic Camps–the best meetings I have ever attended. Another one coming up in a couple of weeks in southern California: If at all possible, be there. All over the country–please, make your way to an Apostolic family camp! They’re the greatest!

It is only 26 miles from Long Beach to Catalina, but yet it was morning before we anchored off the lovely town of Avalon. Even moving very slowly, it could not have taken that long: Throughout the dark night, we must have circled sharply within the western waters of the blue Pacific.

At one time on Tuesday morning, as I sat on the tail section of our ship looking toward the island, I saw as many as five of the yellow boats ferrying passengers from the Paradise to the charming and very popular island. When the time came that we had agreed with our friends to go over, we found that the lines to board the yellow Catalina boats snaked a long distance through narrow hallways. As Jerry and I walked.. and walked.. to find our place at the rear of the line, we asked the people we were passing how long was the wait. Disgusted, one lady–about half way back–said she had been waiting half an hour already. We kept walking, finally coming to the conclusion that our wait would be at least an hour and a half. Not worth it, we both agreed.

We left the line, circled back and there was Elaine, motioning to us. “Come this way.” We did and within a very short time were aboard a yellow boat, and in mere minutes were standing on the dock in Catalina.

“What happened?” I asked her. “How did we get in that line?”

“I don’t know,” she replied. “We were standing in that ugly long line when someone came for us, saying, ‘Get in the line here.'”

We spent an hour touring the fabled island aboard a 4-place golf cart. It was delightful. Back at the dock we quickly boarded a boat that took us to our ship…found our way to the buffet for lunch…slept much of the afternoon…then dressed for dinner, where lobster was served on our elegant plates. I tried to figure out the silverware, but couldn’t identify the use for so much; each place setting consisted of eleven pieces!

Dolphins for a Swim, originally uploaded by Shirley Buxton.

A most delightful part of travel is that of observing animals in the wild. Every day while we were in Rincon I watched as dolphins moved up and down the Pacific Coast. Friendly mammals, they often swim close to the surfers, and are even known to nudge up against them.

Once as I was on the walkway along the beach, as I looked out over the water, I thought I saw the head of a seal, pop up, look around, then duck beneath the waves. A gentleman stood near, and I remarked that I thought I had seen a seal.

“Yep, there’s one out there. Been in and out of this area for several days. When he comes in here, my fishing drops to nothing.”

Tearing in and out of the boulders that rise from the sea at this location are ground squirrels. I watched this one as he scratched around in the fire ring just outside the door of our RV.

The food from the fire ring seemed to be insufficient, for he moved then to the vegetation that grows among the rocks, and picked a fine morsel. First, though, it appears he paused. “Lord, we thank you for this food.” Well, I’m not sure that’s what he was saying, and I know he didn’t have his eyes closed, but I was close by, and you were not, and I insist I felt a little bit of gratefulness emanating from this little critter.  (You’re forced to indulge me, you know, unless you just click out of here, and I’m sure you wouldn’t do that. )
–
Having properly offered thanks, my ground squirrel poked the food into his ready mouth. Ever watched one of these cute critters up close? It’s hilarious; their mouths jaw so fast it looks as wild and jerky as a film that’s being “fast-forwarded.”
–
They’re very pretty animals.

We were five then–Andrew hadn’t come to us yet–and that summer night as we slept in the Volkswagen camper, we suddenly awoke to noise.  Someone–or something–was prowling around our camp site. Jerry scrambled out of bed, and I was close behind as he snatched up a flashlight, opened the camper door and pierced a beam into the black night.

There they were–raccoons–fat ones with their nimble fingers still around the 3-pound-coffee can into which I had placed the home made cookies–think they were oatmeal, but I can’t recall for sure. The little gezzers

stared, Jerry stared back, then he started yelling and I think I yelled too, and finally the raccoons set down the cookie can and backed away. Strange thing, though, they did not quite retreat, but instead circled our camp–waiting, we supposed, until we would close the door, quit the infernal yelling so they could get on with their midnight repast. 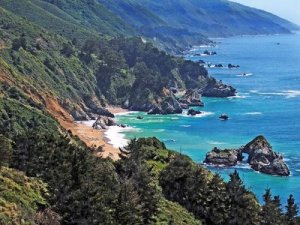 One of the most beautiful places I have ever visited, and a spot where we have taken more than one family vacation, is Big Sur. Highway 1 up the coast of California is unexcelled in raw splendor and natural appeal, and it is around Big Sur that many people believe the area to show its finest face.

We have stayed in a lodge there, but usually we camped in one of the several rigs we owned through the years.

All of us have swam in the frigid water, walked the trails through the redwoods, cooked many a marshmallow and a few hot dogs around evening camp fires there; we’ve told stories, took youngsters fishing, refereed arguments, taught lessons…and in general,  stitched together a wondrous tapestry of family vacations at Big Sur.

Now the area is on fire, and the entire community of Big Sur has been ordered evacuated.

BIG SUR, Calif. – Facing a stubborn fire, California officials Wednesday ordered the evacuation of Big Sur as flames flared on nearby mountaintops and moved steadily toward this coastal retreat.
Firefighters have been attacking a fire near Big Sur for 11 days and had been helped in recent days by fog, moist conditions and lighter winds. Seventeen homes have been lost here – more than half the total destroyed statewide from the first major wildfires of the season – but many residents had been allowed to remain as the fire stayed to the east and south.
But overnight Tuesday the fire unexpectedly intensified, prompting mandatory evacuations of residents on both sides of Highway 1, the scenic coastal byway that runs through the Big Sur valley.
Statewide more than 19,000 firefighters and other workers have been fighting fires since June 20, when a line of storms and lightning sparked hundreds of blazes across the northern and central parts of the state. The blaze near Big Sur, known as the Basin Complex, is just one of some 1,100 currently burning in California, according to Cal Fire, the state fire agency

I’m praying for all the people in these areas and for our brave fire-fighters.

(These are all file pictures.)

EDIT/UPDATE: Adam Housle of Fox News is maintaining an update on the situation in Big Sur. At the link I have supplied, is a video explaining “cutting-edge” fire fighting equipment and sensors. Check it out.

Breaking news says they have been found!

Earlier today I heard interviewed both the mother and the grandmother of the children who, along with their father, had been missing since Sunday in snowy, rugged terrain in northern California. I could hear the terror in the mother’s voice this morning as she told of her family venturing into the woods to cut down a Christmas tree.

Rescue search teams today were frantically racing time. Another powerful storm was bearing down on the area, and the family had already been missing for four days.

Then a few hours ago as heavy snow began to fall:

A California Highway Patrol helicopter crew spotted Dominguez atop a small bridge and landed nearby, sinking into 2 feet of snow, flight officer David White said. The family had taken shelter in a culvert beneath the bridge and stomped “help” in the snow, White said.

All four were walking, talking and drinking hot chocolate while being checked at Feather River Hospital for dehydration, hypothermia and frostbite, treating physician Kurt Bower said. He expected them to be released later in the day.

Bower said the family had some water but nothing to eat during their ordeal.

“I’m surprised how good they are,” he said. “There’s a miracle from God in there somewhere.”

“Our hearts are all full right now,” said Cory Stahl, who closed his pest control business so his employees could help look for the father, Frederick Dominguez, their co-worker. “It’s a very merry Christmas now.”

There are tidings of great joy in the world tonight, a big chunk is in Paradise, California and surrounds the family of Frederick Dominguez.

All the details are here.