There are some things against which one cannot argue. Such is this moving scene.

Newly released footage of an emotional interview with McCain as a prisoner of war in Vietnam shows him lying injured in bed and describing his ordeal in captivity.

I listened from the initial word to his final ones as Pastor Warren of the famous Saddleback Church in California hosted a forum in which presidential candidates Senator Obama and Senator McCain each addressed the capacity crowd. It was the first meeting of its kind; an impressive event.

Previously on this site we have discussed the issue of whether or not such political events should be held in church venues, and both pro and con opinions have been voiced. I wish to disregard that facet of the question today, but I am curious to hear your take on this meeting. Did you listen or watch? What is your opinion?

In my judgment it was an excellent affair, timely, and with pertinent, probing questions asked and–for the most part–answered. It was an interesting approach. Senator Obama had drawn to be first, and for an hour, with Senator McCain not present or hearing his answers, Pastor Warren had asked him questions. After an hour, Senator McCain was presented to the crowd, and was asked the same questions.

It was an intriguing, enlightening presentation. I’d like to hear from you, and along the way, I will probably add other comments.

When our radio in the bedroom played a theme from an old show this morning, I was attracted by the rich low tones that emanated, and that I identified as being produced by a bass violin. A bass violin–what an instrument that is, and one that used to be played in our churches. I can’t remember, though, when I’ve seen such an instrument in a modern 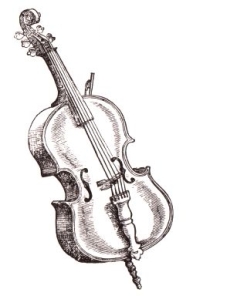 church service. Often, in those long-ago church gatherings the bass was played, not with a bow, but with the plucking of the strings–a pizzacato technique.

I asked Jerry about it.

“You used to play the bass, didn’t you?”

“Yes, I did…never owned one…and I don’t believe I was very good at it, but I did play.”

“No, just plucked the strings.”

“Wonder why we don’t see those in churches anymore?” I persisted.

“Probably because of electronics.”

That discussion aroused in my mind the issue of whether or not electronic instruments are superior to acoustic ones. Is an electric bass better than those big bubbas that used to stand prominently on the platform? Smaller and more convenient, that’s for sure, but are the tones as full and husky?

And what about these?

Guitar–Is an electric guitar superior to an excellent Martin or Gibson acoustic guitar? (probably showing my age by mentioning Martin and Gibson. Do they even make them today? Is there a much superior acoustic guitar?)

Drums–Had to come back and add these. Almost forgot the choice of electronic drums .

Have you ever listened to the rich low tones of a bowed acoustic bass violin? Have you admired the elegance of the instrument itself? Take a listen here. Excellent music…then tell me your opinion of acoustic versus electronic instruments.

In preparation for a bout of vacuuming, I had moved aside a mound of shoes that sat near the front door. The shoes were worn to the point of there being gaping holes and major fraying.

Brady was standing near. “Those are Cole’s, and he loves them.”

Well, they didn’t look lovable to me, and I knew Cole had better shoes for he had been wearing some, but I did recall he had asked me earlier where were his brown shoes. Now, as I stood with the ragged tennies in my control, I had an urge to toss them into the nearest trash can. But I restrained my eager hand, not being savvy to the entire situation, and certainly not wanting to spoil someone’s “love affair.”

Ever had anything you knew was past its prime that you just couldn’t bear to discard? A car, a skirt, a pair of trousers, a toy…?

When we were still pastoring in Rialto, we drove a 1974 Continental that gave us excellent service, but finally it was worn out and looking shabby. I’m never one to want to be buying cars, and it was probably me who encouraged us to keep hanging on to that big silver relic. Finally, though, someone handed in a tithe envelope with a note that read, “For Sister Buxton a new car!”

When Andrew was little, he had a tricycle–the kind with no pedals that you push with your feet, and he adored that thing. Once either his dad or I tossed it into the trash, for he was bigger now and had a pedal tricycle. But he spied it sticking from a garbage can, and rescued the treasure before the trash truck arrived.

One of my boys–I think it was either Steve or Andrew–went through a time of wearing an abysmal hat. It was a hideous thing and I itched to help it disappear.

What is it that causes us to hang onto things long after their period of usefulness has expired? Perhaps such items are in a unique way a source of comfort. They’re known, they’re tried, they’ve passed the test of time. They work.

Cole must have arrived home with his beloved shoes, for I haven’t seen them around here anywhere, and I don’t think I threw them away. 🙂