Balboa Park is the largest urban cultural park in the country, the home of 15 museums, several renown artistic venues, and the world-famous San Diego Zoo: altogether, the park covers 1400 acres. Pepper Grove is the section Rebecca had chosen, Jerry and I took written directions the hotel furnished, and we found the area with little delay.

Others coming from different streets, despite the large BUXTON signs stuck around the park, had a tad bit of trouble finding the group. The park is set among rolling–sometimes steep–hills and finding a certain area can be a challenge given the very large area Balboa covers.

The setting was idyllic; the finely clipped lawn stretched wide, then plunged steeply into a narrow canyon, its far edge rising to other green hills where grew also ancient California Pepper trees akin to those whose gnarled trunks and

low-hanging branches stood before me in stately form. I gazed as Jerry parked the car, taking in the white tent that had been erected and the red and white checkered cloths that covered the tables.

Grandchildren ran to us, and thus began the party.

If the party had not been perfect, I wouldn’t try to convince you of such a notion, but in all truth, I can affirm that it was. From setting, to food, to conversations, to treats, “entertainment,” and to guests it was a sterling, perfect party, and it is safely ensconced in my memory bank, filed as a very special time and event.

“I want this to be a simple affair, Rebecca,” I had told her in the early stages of planning the party that my children were pitching for my 70th birthday. “I want my family and a few close friends there, but I don’t want anything extravagant; I don’t want it to be a burden on anyone.

That was the genesis of the party style, and I left it that way. Somehow these four marvelous youngsters of mine executed exactly what I wanted, even though I didn’t precisely know myself just what I envisioned. It was a dream party.

I had wandered around, admiring and exclaiming over everything, including my baby and childhood pictures that were displayed, which Rebecca had pilfered from our “picture room” in Crestline. The decorations were adorable and included 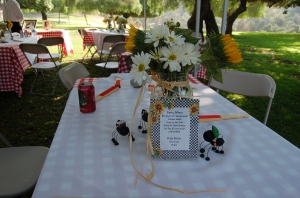 bouquets of sunflowers and white daisies, stuck into large Mason jars and tied around with raffia streamers. Such was the thoughtfulness of these children of mine, that on every table, as part of the centerpieces, were resin ants, high-legged ones. I suppose those bug-eyed and fetching critters were to insure a realistic picnic ambience, just in case the natural born insects failed to make an appearance.

I was so engrossed with these things, that they had completely set up and were playing music before I even saw them. Those responsible were watching my reaction and later told me it was as though I was oblivious to them as two young women

moved across the lawn, set up their instruments and began playing. I turned and saw that a cellist and a violinst had been engaged to furnish music for my party. Beside the people, who of course, ranked first, this music was my favorite part of the whole deal. With only a couple of breaks they played for the better part of two hours. That the music was so hauntingly beautiful, and afforded such a splendid visual sight, and that my children had thought of such a treat, moved me so that I stood in tears as I took it all in.

Michael had bought prime rib roasts and hand cut them into steaks, which he grilled to order, along with chicken breasts, and hot dogs for the children. Corn boiled in a giant pot, gourmet cheese was passed and green salads and luscious bread and plain butter and herbed butter, and fiery red watermelon slices were handed around. Then was the cake, black and gooey, and there were huge cupcakes with sunflowers in their centers, and gifts, and Happy Birthday sung to the string accompaniment and then I said, “It’s Shawnna’s birthday,” so we sang again, and this time I joined in.

They thought of everything; had engaged people from Andrew’s church to help serve, brought bottles of bubbles for the children, and their paper plates of food were served atop a Frizbee, so that when they finished eating, a Frizbee game went on for hours.

We visited for a very long time, and then the light began to fade, and we gathered for group pictures. 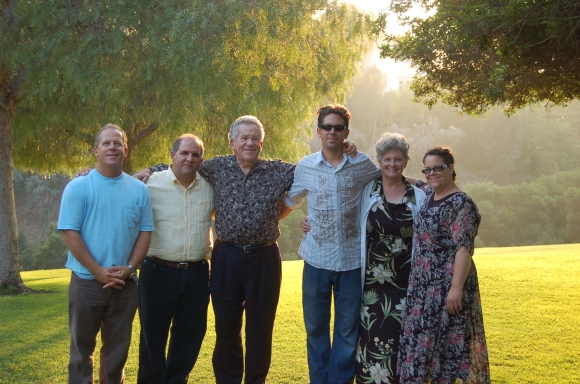 My four marvelous kids and their daddy and their mama. 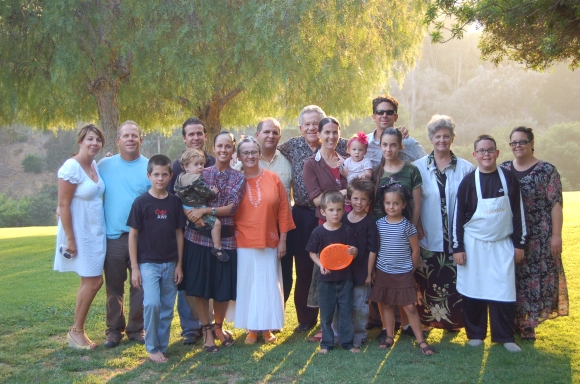 And after this picture was taken, I said, “Okay, all the adults be gone. I want a picture of my grandkids with their granny.” 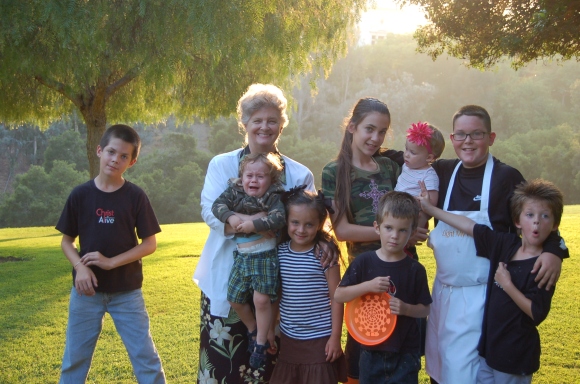 In no way do I deserve the life I have lived; the marvelous husband I married, the astonishing children God gave us, our 12 grandchildren and 8 great-grandchildren and the large number of loyal and loving friends. I’m thankful for health and physical possessions and that I live in this wonderful country, the United States of America. I’m ecstatic that I’ve been blessed with 70 good years on this earth.

This morning, we had a two-hour breakfast with Steve, at 3:00 we’re meeting Rebecca and Andrew and their families at the beach in Imperial Beach and at 7:00 we’re having dinner with our dear friends, Nita and Johnny Hodges.

NOTE: Click on the pictures and they will enlarge.