Jerry has macular degeneration now. He almost never drives. He can hardly use his phone because of his limited sight. We’ve had snow on the ground for weeks, and today alone we have received almost six inches of rain. Sort of snow bound here in Crestline.

Yesterday, he said, “Tomorrow is Valentine’s Day, and I didn’t get you anything.”

I brushed the remarks aside. “Jerry, that doesn’t matter. You know that.”

This morning our furnace quit belching out heat. Jerry traipsed down to the basement. Came back. “The flame is lighting, but the fan doesn’t come on, so then the flame goes off .”

Jerry called Ken, our across-the-street neighbor, who is the best neighbor anyone could possibly want. Ken’s a little younger than we are . . .but still an old man, I suppose. A couple of weeks ago he had cancers removed from his nose and ears, and for a few days when we would see him, the end of his nose would be white . . .with bandages. Both men poked around in the basement.

The called furnace man came. His poking around in the basement led to his saying, “Your furnace is 40 years old, has this and that problem. You need a new one.” We ordered a new one. Wrote a check for half the charge. Will pay the other half when he installs it.

Later I stood by Jerry as he sat on a stool tending the fire in our fireplace. “I’m sorry I didn’t get you anything for Valentine’s Day.”

“Doesn’t matter, now does it?” I placed my hand on his shoulder. “Red hearts, chocolates, cards . . . It really doesn’t matter, Jerry.”

We’ve made babies together. We’ve bought furnaces and paid water bills. Once upon a time we were young, and now we’re old. A time or two, we stared down death. We swatted the tush of our sons, and of our daughter, and now, they with ease, place an arm about the shoulder of a fellow and say, “Let me tell you about Jesus.” We’ve wrecked cars and bought hamburgers and pumped gas and eaten in joints. We’ve settled into the skinny seats of planes, then tramped the ground in countries not our own. We’ve cried in our living room and in our churches. We’ve hooted in laughter. We’ve cooked biscuits and gravy, and grilled spareribs on our back deck. We’ve buried friends. We sleep with Winston, and drive ourselves crazy trying to make him mind us. We’ve looked wide-eyed at our kids as they took us in hand to tell us about Alexa and Siri. We’ve ridden horses in the Sawtooth mountains, and I fell off, and we’ve waterskied, and preached, and taught, and sang. And loved.

A box of chocolates? A rose. A card. Some glitter. . Sorry I didn’t get you anything, Shirley. Are you kidding me?

I’ve been tearing around here during the last few weeks, more than usual and that’s saying a lot. Just to fill you in, during the past month Jerry and I hosted a dinner party for seven–counting us, then a couple of our children and their families were here for four days for Thanksgiving, then last Saturday, we held our annual Christmas Open House and I whipped up a huge pot of soup and spent a couple of days baking goodies. There were 28 of us. Now understand, I am neither complaining or bragging about all these festivities that have been carried on here at the Buxton home. For the dinner party Jerry grilled ribs on his back deck smoker, and it just feels to me that if someone else cooks the meat, I can whip up the rest of it handily. Very dear friends have graced our home during these days–some of long duration, others of newly established relationships, and I’ve loved sharing meals around our table. It’s one of my favorite things to do, and I feel honored when such people come to our home . . .and happy. And my kids…to have them here . . .well, it is just the best. So, as I say, the point of this piece is neither to complain, or to brag about all my doings, rather to press a point.

On Saturday afternoon as I was lighting candles, stuffing yeast rolls into my hot oven, and doing a couple of other very last minute things for my guests, I got tired. Just kind of sudden-like, I felt this fatigue threaten me. What is this?  I kicked the rascally feeling out of my being, lifted my head, and soldiered on. But at that moment I decided I would take Monday off. Flat do nothing. Today was Monday–The Day. And I have done nothing. Well, very little.

It’s been kinda cool. When they came to our Open House Craig and Sandra presented me with a beautifully wrapped box and when I opened it, I found this. 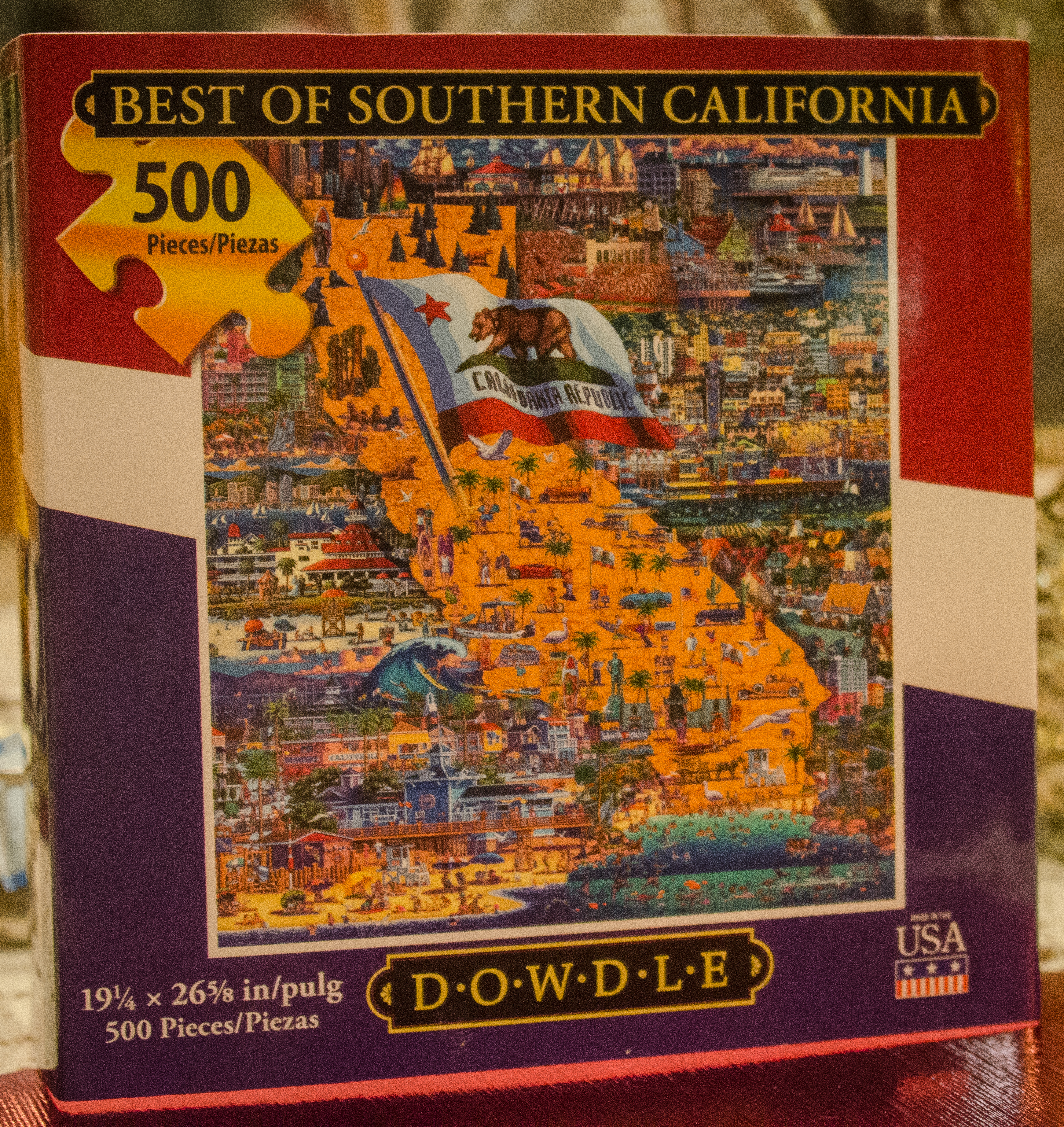 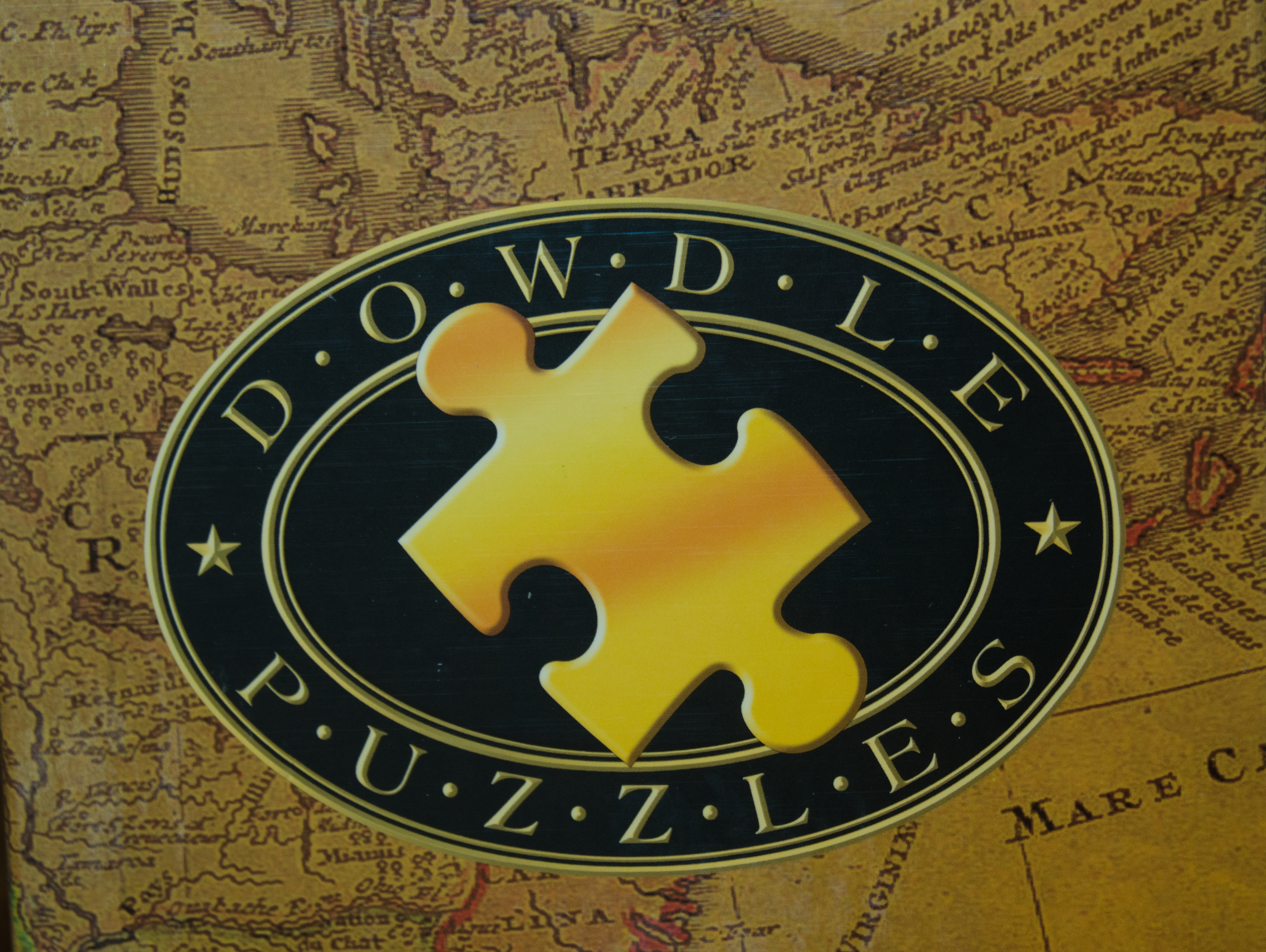 This morning I spread out the pieces on a small desk that sets between the kitchen and the dining room, pulled up a little bench, and have spent a great portion of the day there. I’ve connected all the edge pieces, except that I seem to be missing one. Expect it will show up before I’m finished. I’ve called Alexa to play Christmas carols, we’ve listened to cowboy shows on XM radio, I’ve scratched together a couple of meals, and heard beautiful comments over the radio about the late President Bush. What a commendable life he lived. 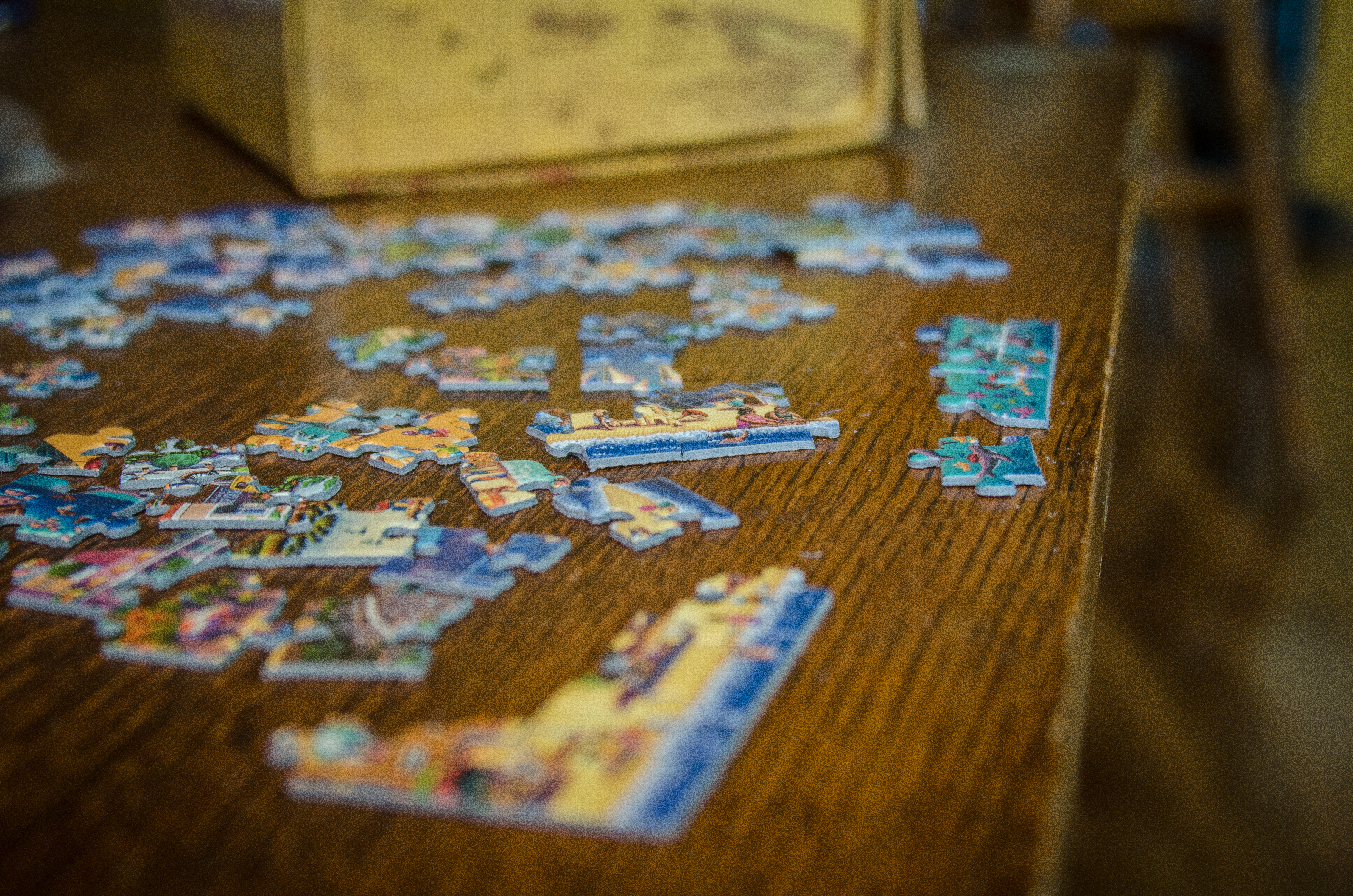 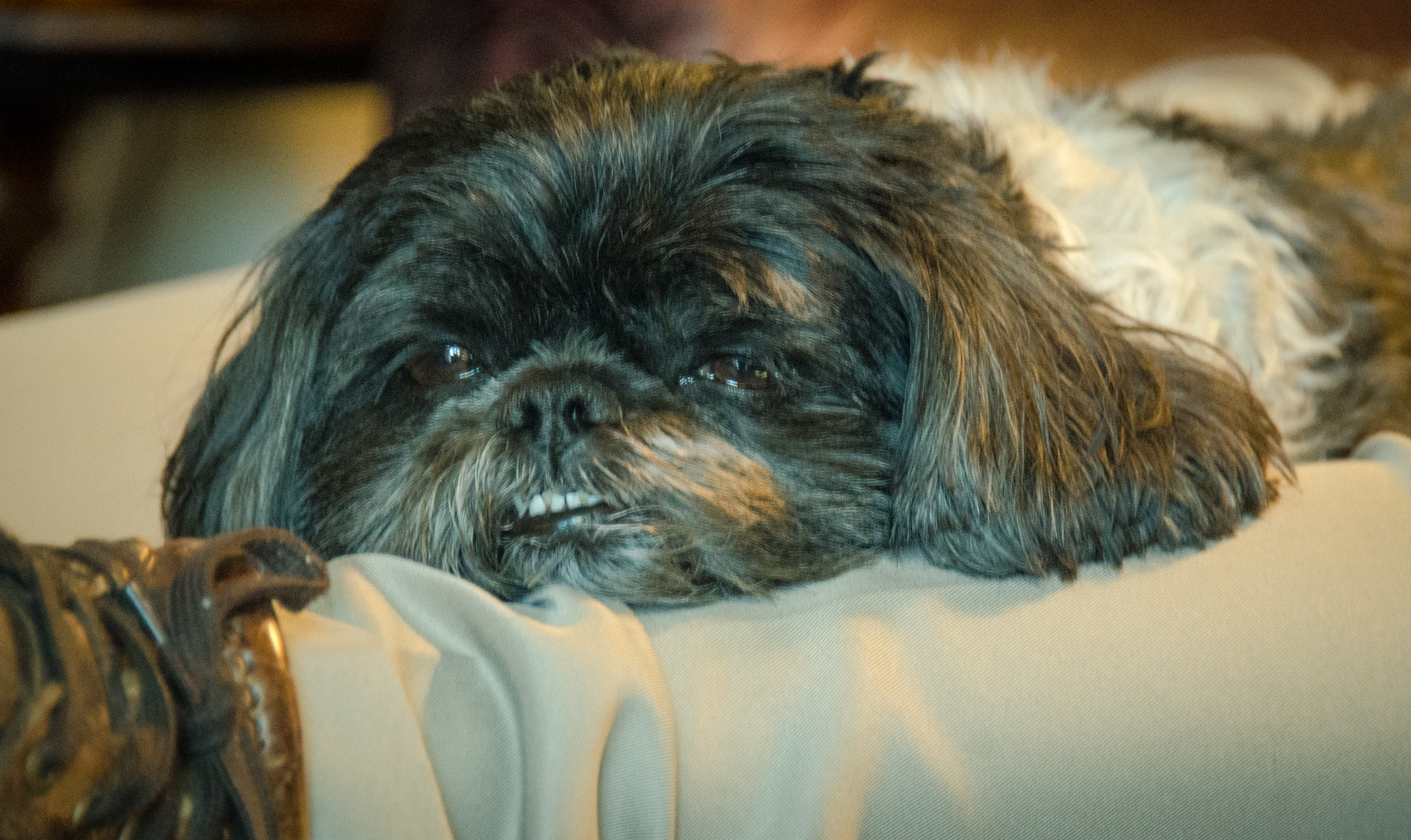 Winston took Monday off too, but such activity is not terribly unusual for him. He’s snuggled down here between Jerry’s legs that are stretched out on his recliner. Snoozes throughout the day. Rallies to eat and take in tasty treats.

I’m within a couple of months of the finish of a book I am writing. The book will be titled Dream Shards. The thrust of the book is that we all have dreams that from time to time are broken. What then we do about that? Pick up the pieces and rally, or wallow around in our grief and disappointment? Toward the end of the book I speak of ways to dream again and one of my points is that it is important to stop dashing around so much, rather indulge in slow chunks of quiet hours and quiet days.  Frequently. Restores us. Refreshes us.  I already know I’ll have a hard time writing that part. Definitely will be feeling  hypocritical!

But I did it today, and it has been wonderful. Try it. You’ll probably like it.

PS The puzzle is beautiful. The artist has a website: www.dowdlefolkart.com 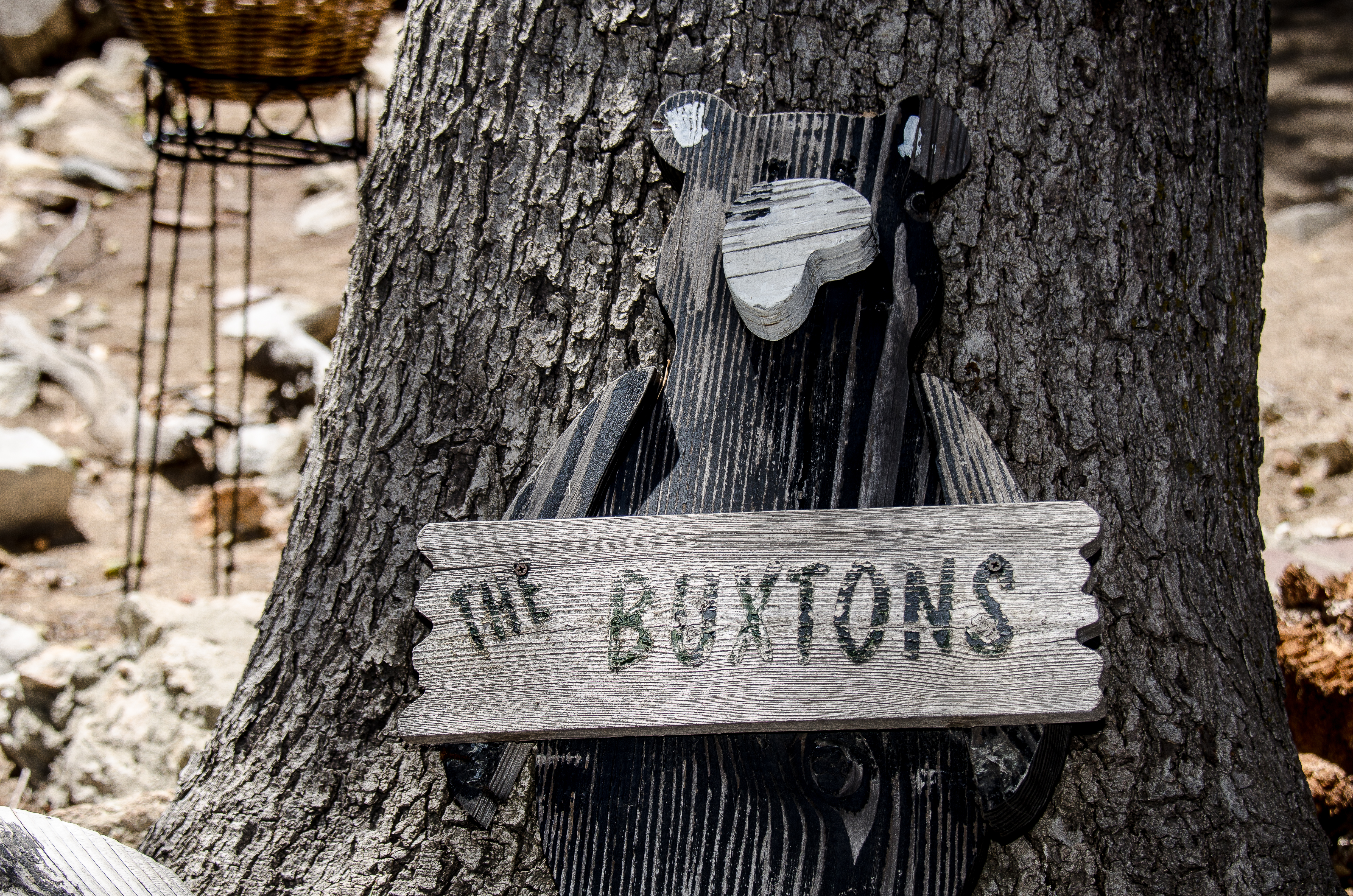 Pappy needed a little help with a couple of things to spruce up the Buxton place, so Nathaniel came up to join with Cole and Brady for an hour or so of yard work. 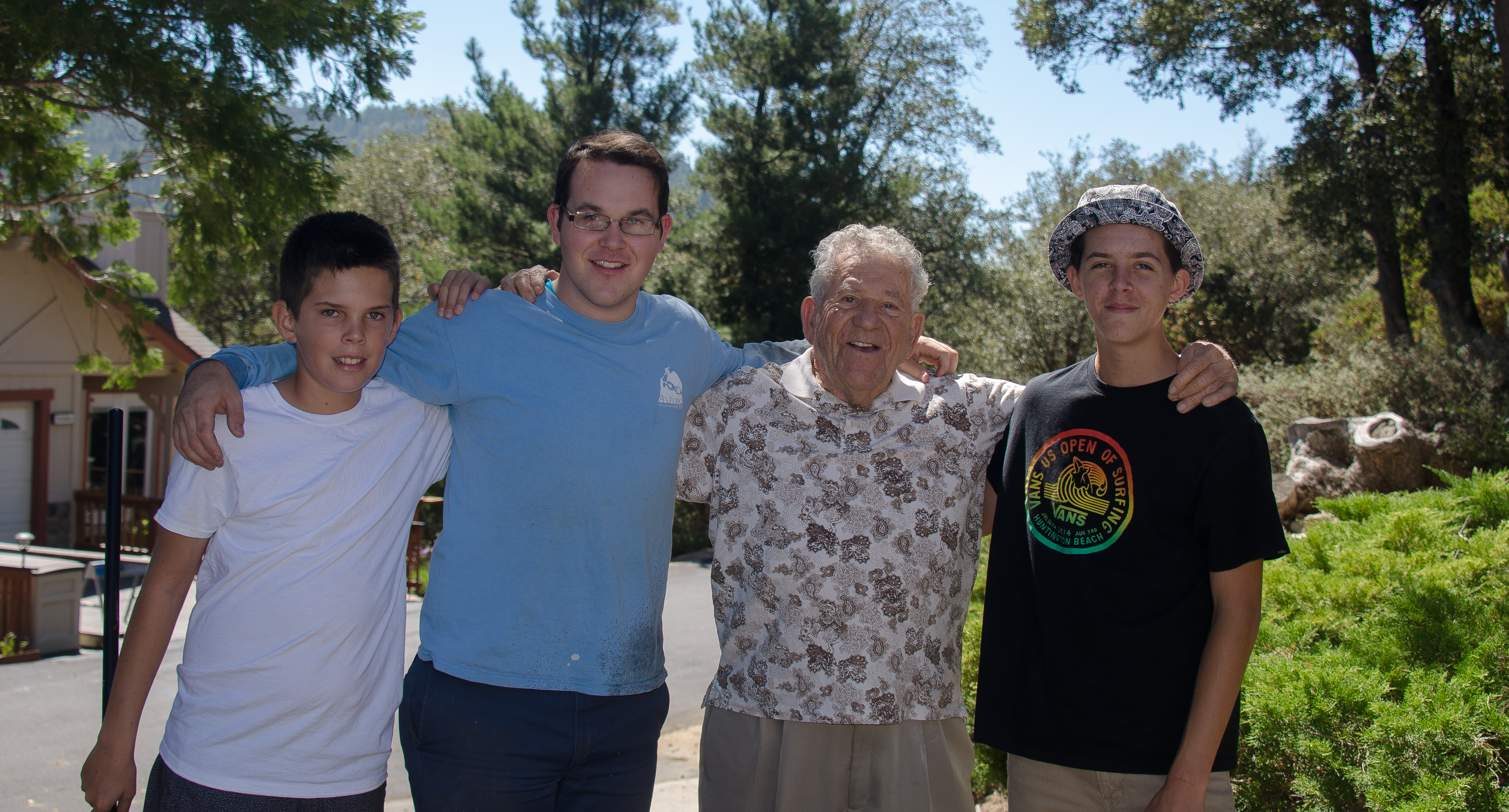 Ella baked a cake with the help of Brady and Duncan Hines, I found three candles in a party drawer, and we invited Rebecca’s Paisley, and Shelby, the yellow lab who lives across the street. Wednesday was Winston’s birthday, so of course we must throw him a party. 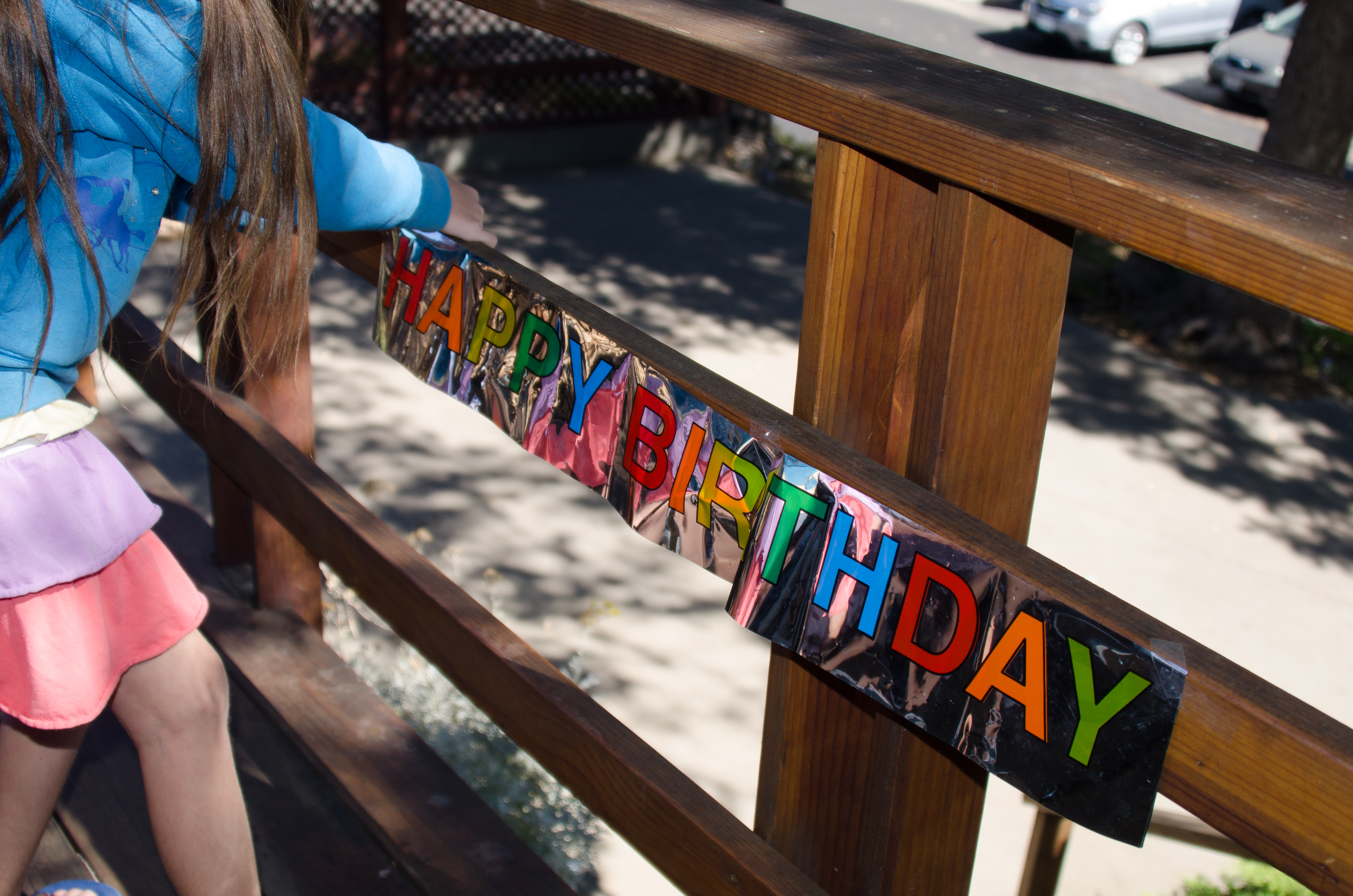 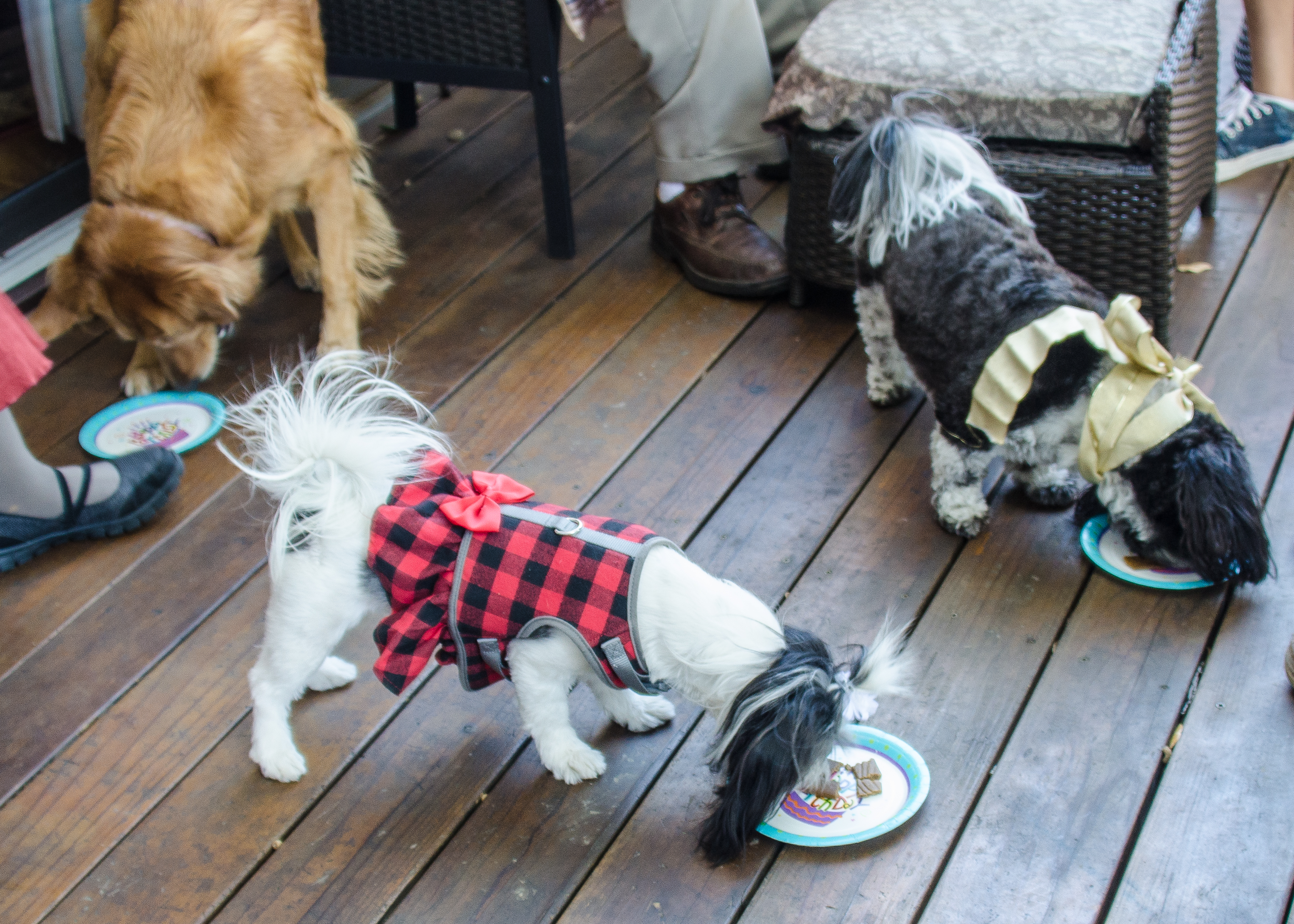 We tied gold ribbon around Winston to dress him up a bit, we served doggy treats on party paper plates, but the celebration did not last too long. Shelby and Winston don’t get along too well, and Winston kept barking at his beautiful neighbor. The party broke up after about three minutes and Brady snapped on Shelby’s leash on and took her home. 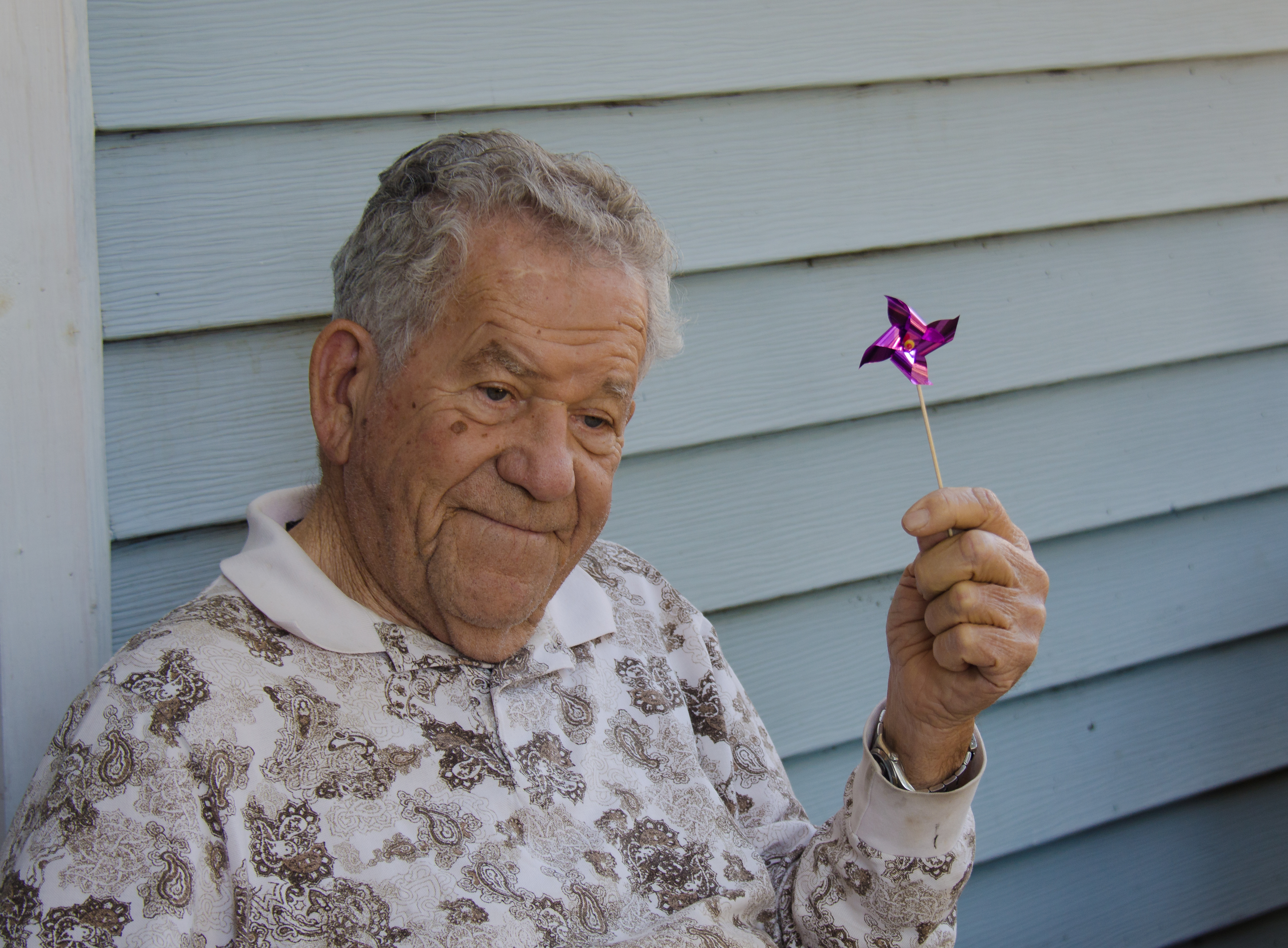 The youngsters’ Pappy didn’t seem too impressed with the party favors, but he played along. 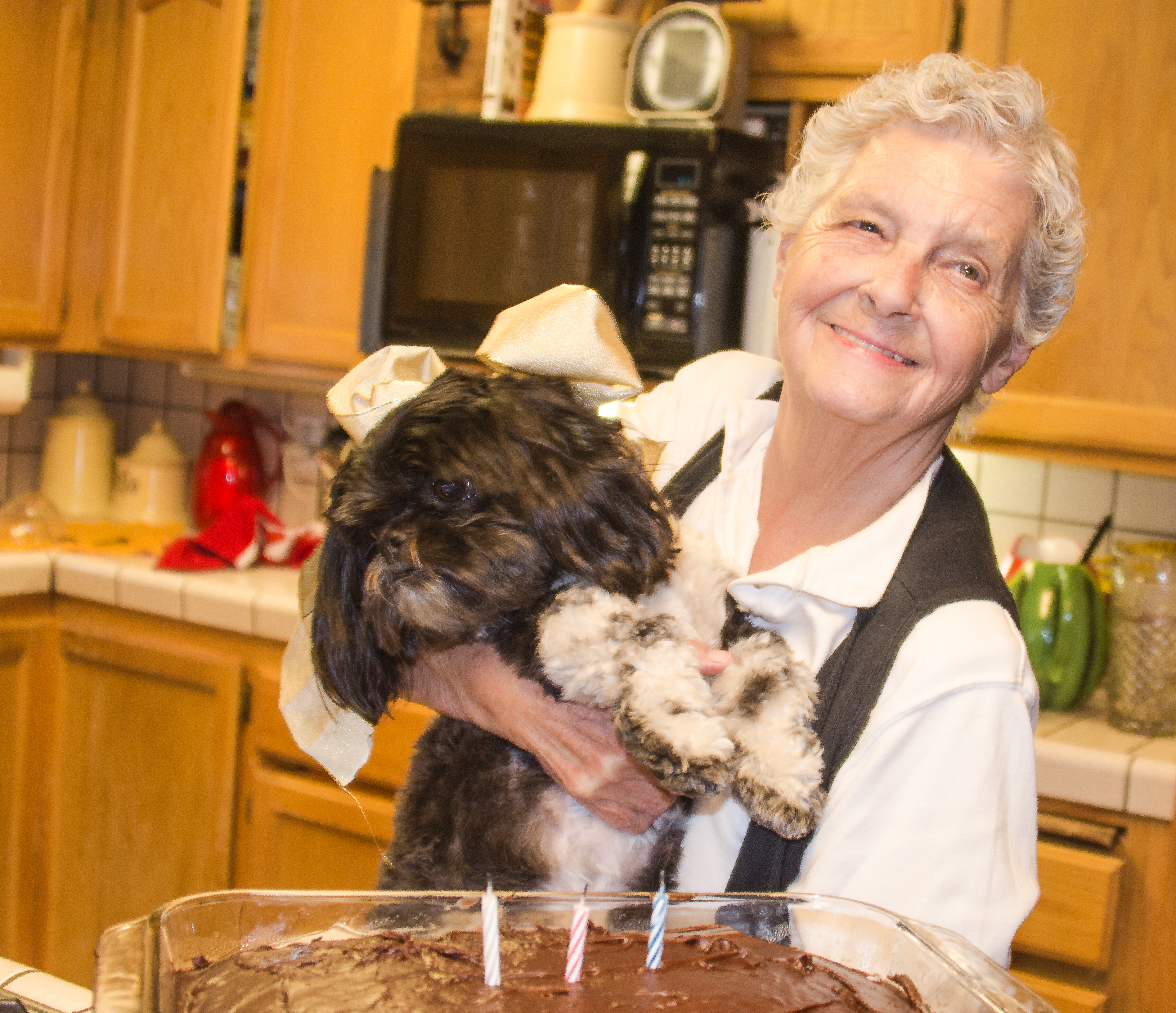 Later we showed Winston his birthday cake, helped him blow out the candles, then we ate generous squares of the luscious chocolate. We did feed him a sweet crumb or two.

We met Elinor a few years ago at the lodge down by Lake Gregory where often on Tuesday we go at noon for a meal served to adults of senior age. She is charming, spunky, beautiful, and 85 years old. During one of our noonday conversations, as we talked of gardening and plants, she indicated she had a dogwood tree seedling.

“Would we like to have it? Did we have a sunny spot?” she asked.

A few days ago Nathaniel had prepared a hole on our back bank in which to plant the little tree, so we were ready.  This morning we drove to Elinor’s place, following the perfect map she had drawn. Jerry was outfitted with gardener’s gloves, a bucket and a hefty shovel. 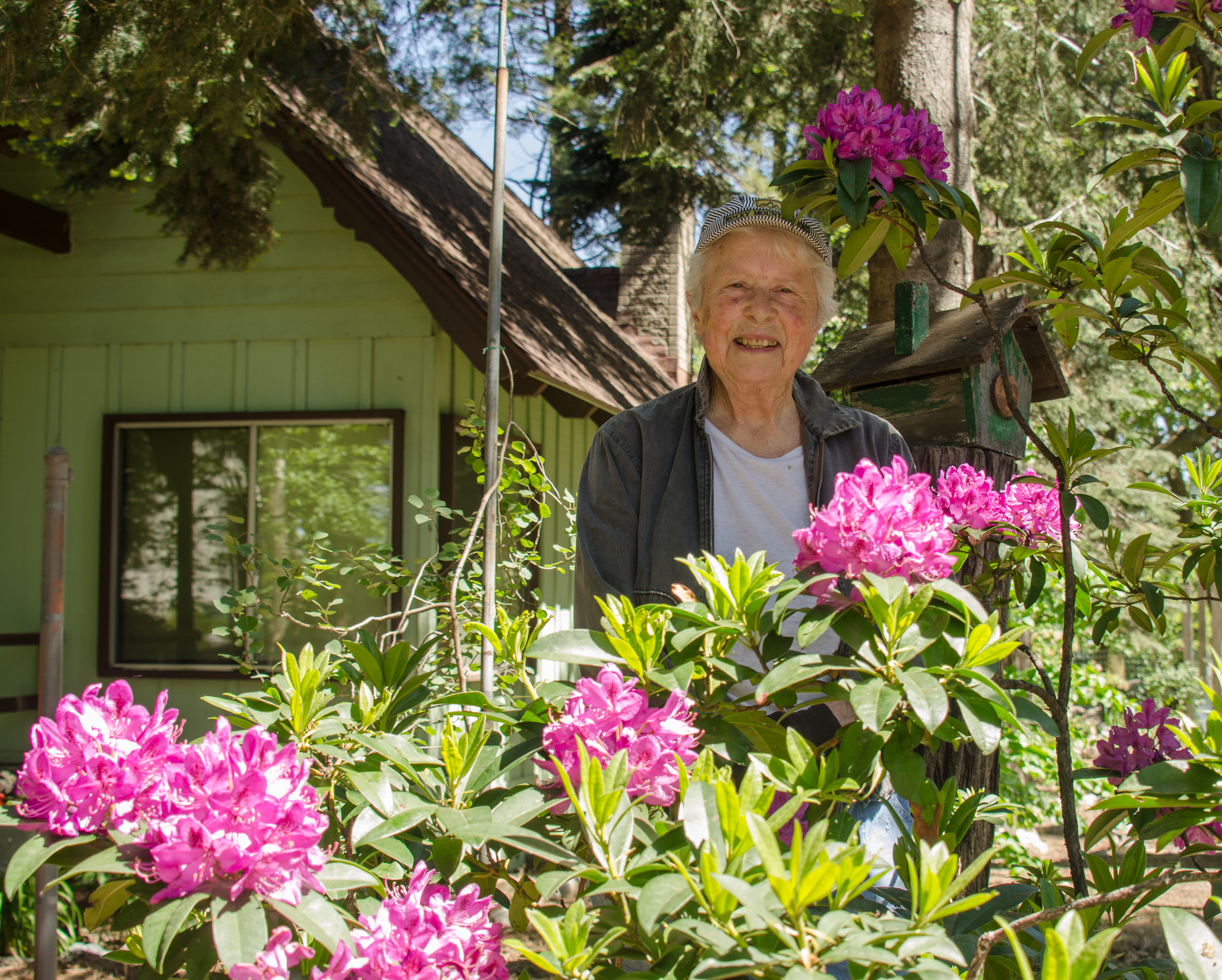 First, before we tackled the transplant, Elinor showed us about her place. Flashing her majestic smile, she stood behind her glorious rhododendrons for my first photo of the day. 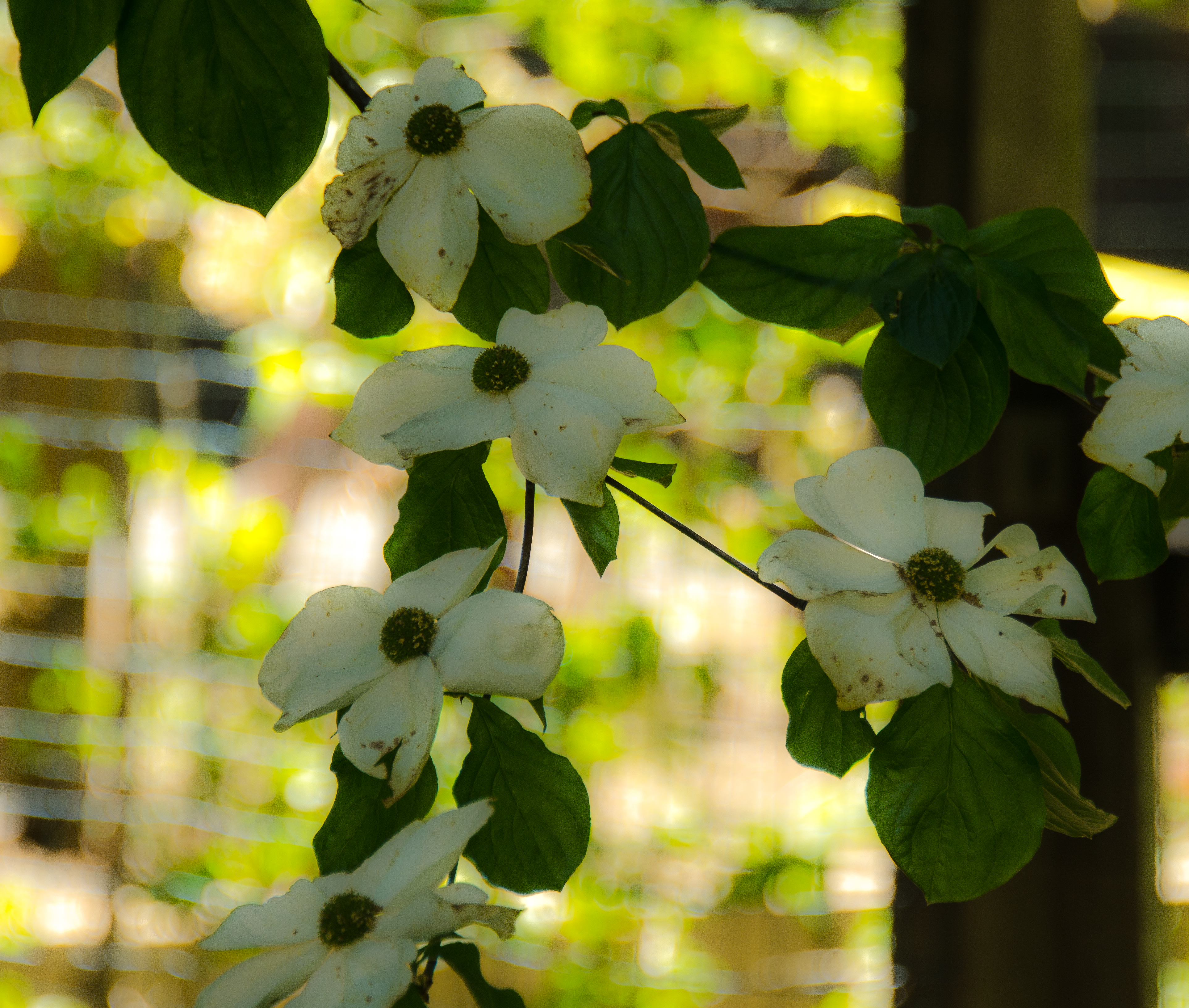 Both the rhododendrons and the dogwoods are past their prime for the season, but the light was so beautiful on this branch, I snapped a shot anyway. Our seedling is from this mother tree which Elinor planted 40 years ago. She has lived in this same place for 47 years. Amazing. 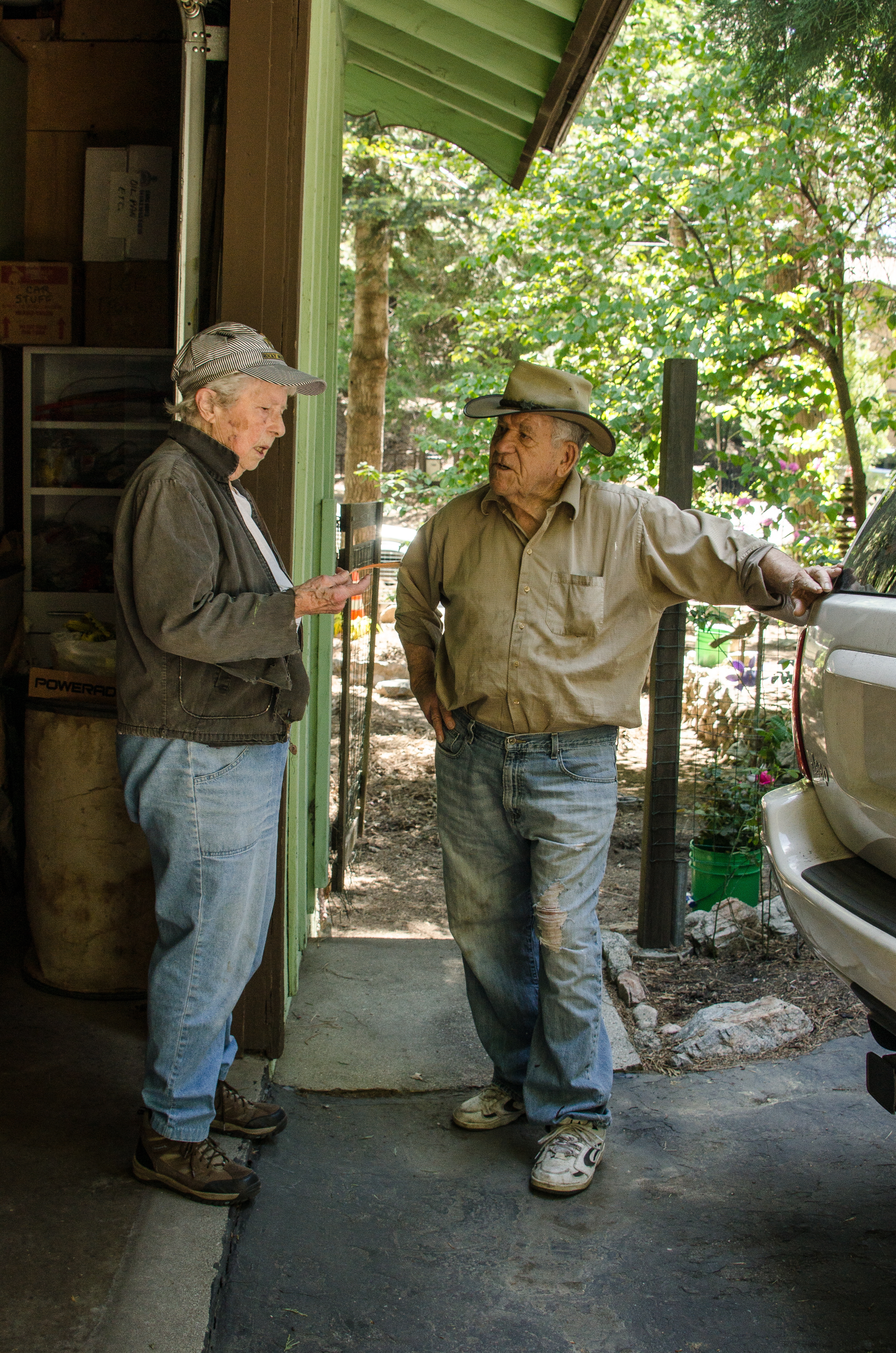 As Jerry prepared to dig up the little plant, she kindly pushed him aside, saying, “Let the old woman do it.” Jerry stepped back a bit, and as they both bent back and forth, scraped, and scooped, the little fella was soon in the bucket and placed in the back of our Jeep. 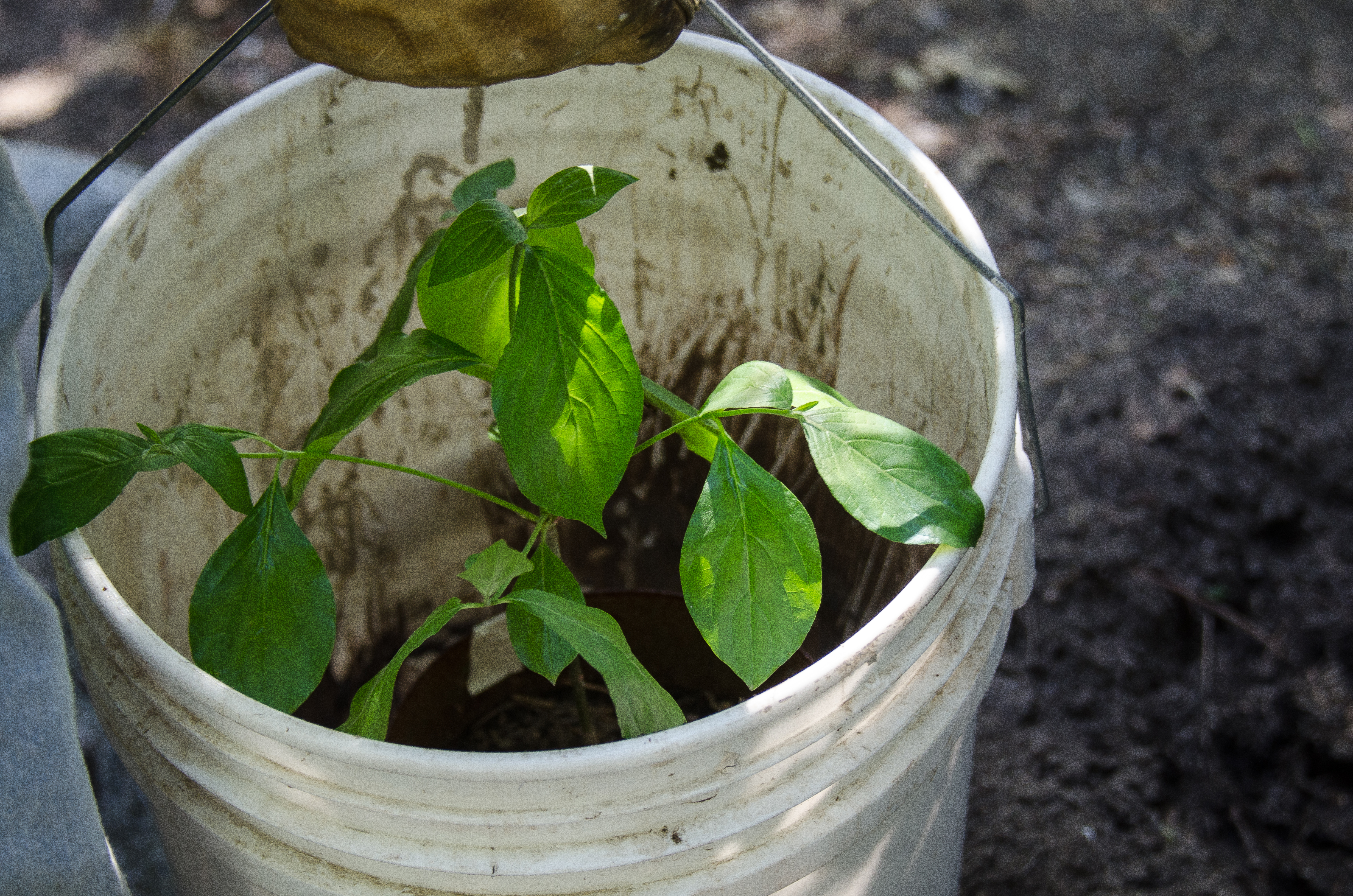 Late this afternoon, Jerry maneuvered our rather steep back bank and settled the two-year-old dogwood tree into its prepared place. Sets now on Buxton property. One day it may reach a height of 40 feet, and perhaps there will be someone around who will say, “Yeah, Jerry Buxton–remember him?–he planted this great tree.”

I had the ingredients I needed, so early this morning, I baked four loaves of banana bread. I took one to Elinor, still warm from the oven, along with a small note thanking her for her friendship.

A fine day? Yes, rather a fine one. 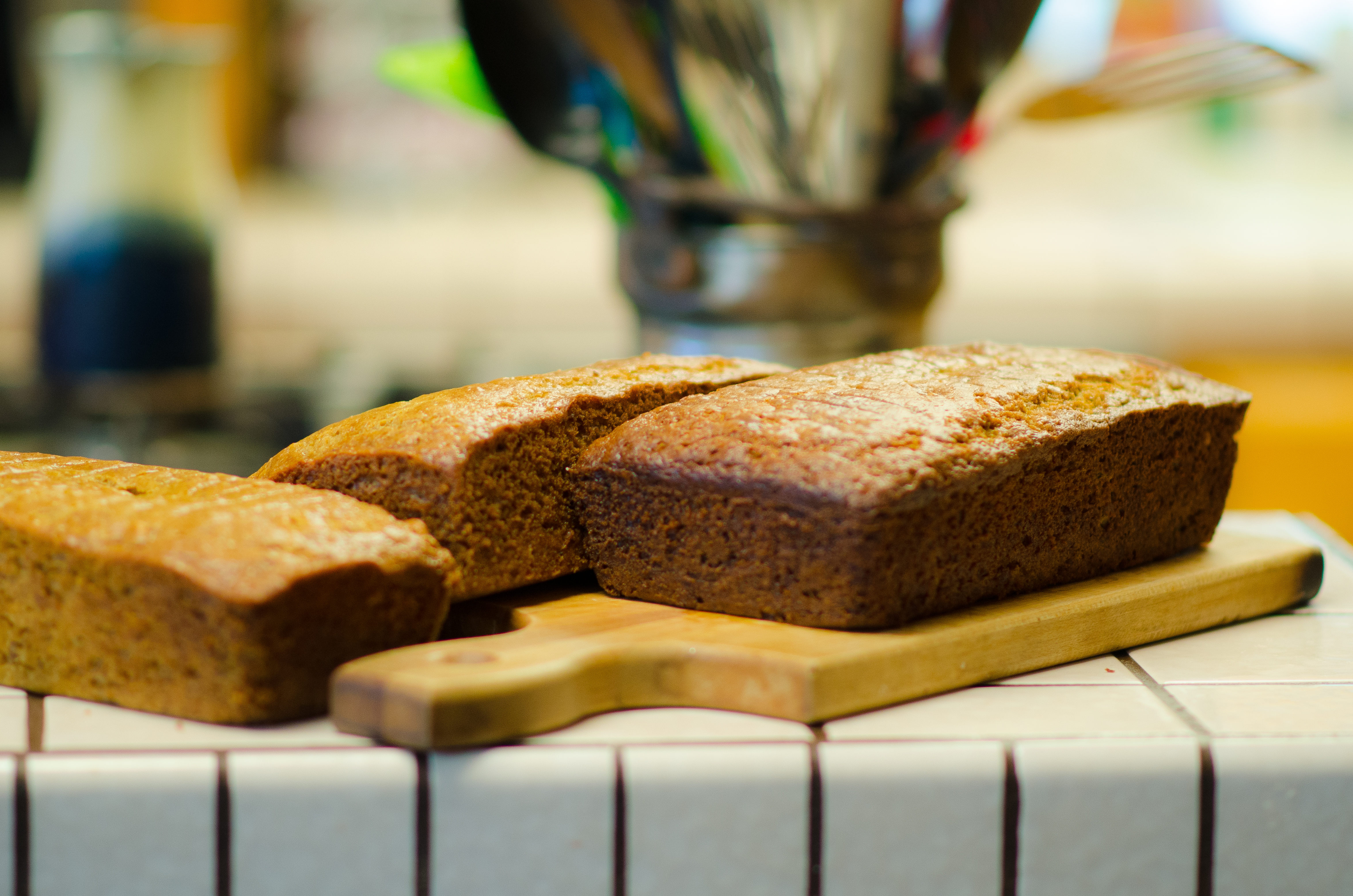 Back from walking Winston this morning, Jerry carried in his hand, then set down on the deck as he dealt with the leash, a cup I recognized. The cup is from a long-ago trip when several friends traveled with us as we trekked all the way from the west coast to the east, where in Maine we ate lobster and drank coffee at the Maine Roaster Coffee place. Five couples, all in very long motorhomes towing vehicles, had the trip of a lifetime, and that fine mug you see here came to be part of our kitchen things in that way. “Motor homing” is in our past and some of the souvenir cups that once bounced around in frisky cupboards now reside in sedate, non-moving shelves in our kitchen. 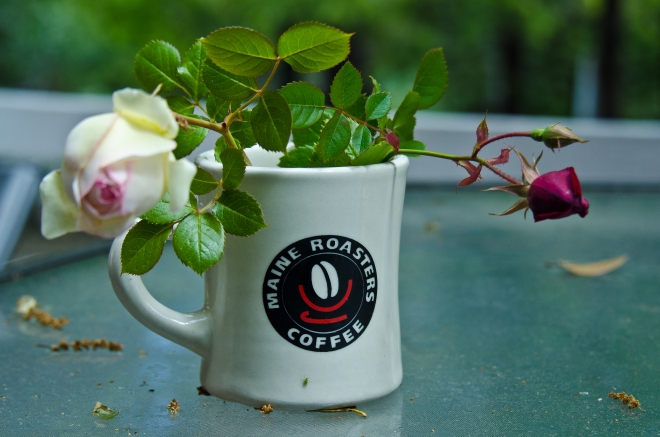 But here it was in Jerry’s hand on this foggy, chilly morning in Crestline. And in the cup were two perky roses.

It was Ron’s doing. He lives five or six houses down, and last week when he popped in for a word he accepted Jerry’s offer of a cup of coffee. I recall him walking out the door, holding the cup in the air. “I’ll get your cup back to you.” 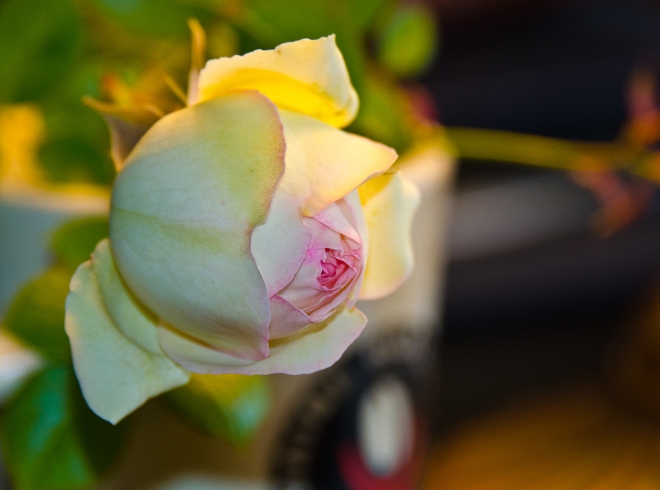 Neighbors. Sweet neighbors. Thoughtful neighbors. With few exceptions those are the caliber of persons who live here in our “neck of the woods.” 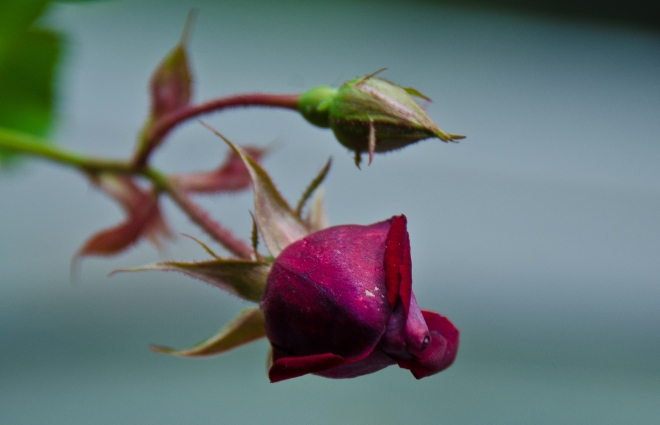 Ron brought me great joy today by placing a couple of stems with roses and buds into the mug he had drunk from last week. 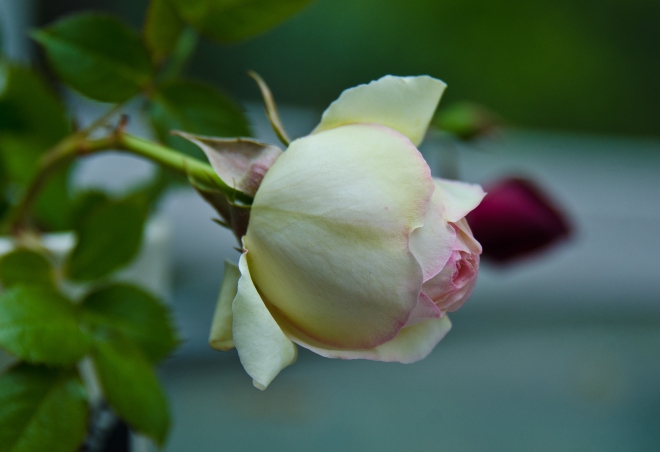 I wasn’t satisfied by merely looking at these treasures, for surely something as exquisite as these deserved a snap or two by my fine Nikon.

And just so, I posed them. I thought of Ron and his wife, of neighborliness, of roses, of their beauty. Of God who made them. 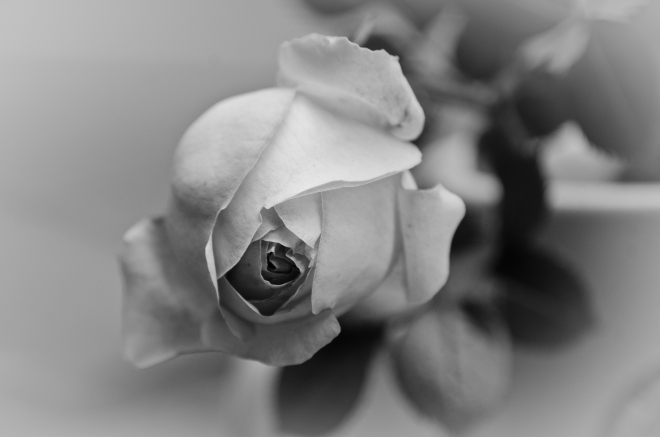 And I thought of you, and wanted to share.