From the time of his birth, my mother doted on him, and should she have lived to see his maturity her impressions would have been confirmed. Along with many others who now understand, she would have known my brother, Farrell E. Forrest, Jr., to be a rare individual. Our mother died at 39 years. Junior was seven. I was twelve. Our sister was ten.

He left home at seventeen, served in the military, spent time at university and obtained a degree in electrical engineering. He invented things, the main one having to do with mining procedures. After his wife died of cancer, and after he had retired, in conjunction with his expertise, he lived for years in Antofagasta, Chile, which is heavily involved in copper mining. In his late fifties or early sixties, beginning with six workers, he founded a business. Before he sold it and retired again, the company employed a thousand people. He exceeded the expectations of a “regular” company owner providing unusual perks to his people, including health insurance.

On the streets of Antofagasta roam many street dogs. Of a particular one, he learned. She is of the Boxer breed, around nine-months-old, the vet thought, skinny, scared of golf clubs, a tendency to cower, and with burn marks on her neck. Junior took her home with him.

Then it was time for Junior to retire from that phase of his life and to return to the United States. Sally. She is incredibly smart, loyal, and beautiful; he could not entertain the thought of leaving her. A handler accompanied her as she was shipped home in an enormous crate. The trip included lots of shots and being quarantined in several countries . . .but finally she arrived in Pittsburg and the handler transferred her to Junior’s vet. The cost? $10,000.

“Yes. Ten thousand dollars, and I’d do it again for this dog.” 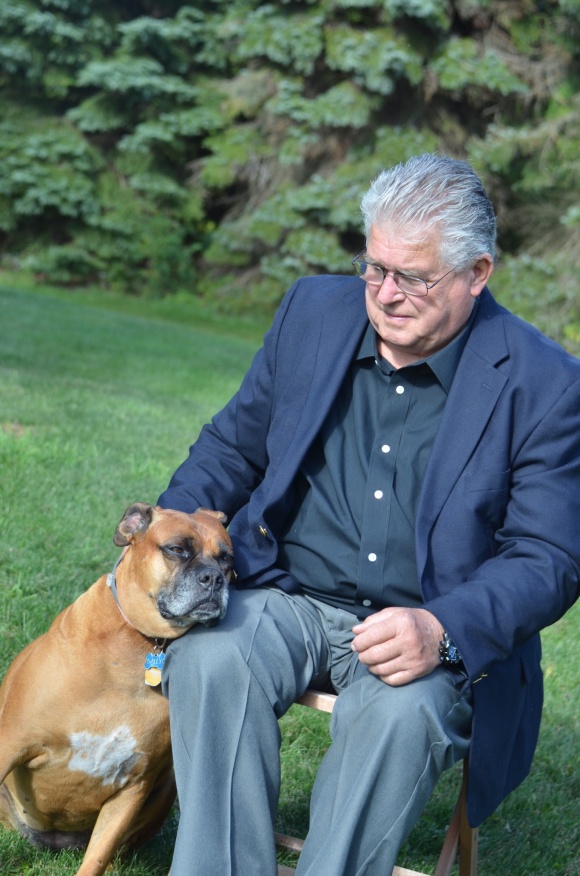 Sunday after church I dragged a chair onto a lawn. “Pictures, Junior. I want pictures of you and Sally.”

I, too, love Sally. She is an incredible dog. Tried to talk her into packing up some bags and moving to California. “Lots of Spanish talk there, Sally,” I told her. “You’d feel at home.” She declined my invitation.

How great to see your brother’s gentleness–something missing in many successful people.

[…] You’re met Sally before. A beautiful, sweet boxer, she thinks Pugsley is her pup. One evening as we all sat in the living room, Isabel did something mean to Pugsley. Next thing we knew a dog fight was roaring with Sally atop Isabel holding her down and biting her ears. Junior and Sandy broke up the fight; Sandy held Isabel down hard to the floor a bit for punishment. A little later Sally went to Isabel and sweetly licked her ears. […]

Junior obviously takes after his older sister: “kind, gentle, generous, successful.” He’s a very smart man to follow in your footsteps. Thanks for this beautiful story and the gorgeous pictures of Farrell & Sally. She’s a really lucky dog, and he is a blessed man to have you for his sister. I’m so glad you finally made it to Pennsylvania for a visit. XOXOXO

Thank you Holly for the very sweet compliments.

It must be awesome to have a brother, but to have one so spectacular is to the moon and back!!! Great story xo

He is indeed wonderful, Melina. I’m just sorry we live so far apart. Thank you for visiting my site and for the comment.

No price can be put on friendship.

Isn’t that the truth? I’m sure dogs are far beneath human beings as far as intellect and “soulishness,” is concerned–that kind of thing–but they can be absolutely amazing friends.

Thank you for following my blog and for your comments.