Ladies and Gentlemen of the world: Meet Sir Winston (Buxton) of Crestline!!

The last time a puppy lived in our home was when Andrew was still in school, and through out our retirement years we have said, “No, we don’t need a dog, travel too much, cold weather here, expensive…etc. . . . Then into my presence, cast before my eyes was this vision of a pup . . and I caught my breath, and I immediately fell in love. So when we pulled away from the beautiful home of the Bob Allen family in Tucson, heading toward California, I was in possession of this magnificent Shih Tzu puppy.

Sir Winston (by the way, as we traveled in the car I cogitated concerning the appropriate name for such a gem of perfection, and as I communicated with the subject of the puzzle, trying this name and that, he somehow let me know that, “Yes, Sir Winston is my name.”

“That’s your name, isn’t it?” I inquired again . . .and he gazed straight into my heart by way of his round glossy eyes, and said, “You got it! My name is Winston!”

On Saturday, Mike and Mel met Sir Winston. Today, before we made the announcement public,  we drove by Rebecca’s, Steve’s, and of course Andrew’s, where we took Chloe home. They’ve all met the new member of the family. 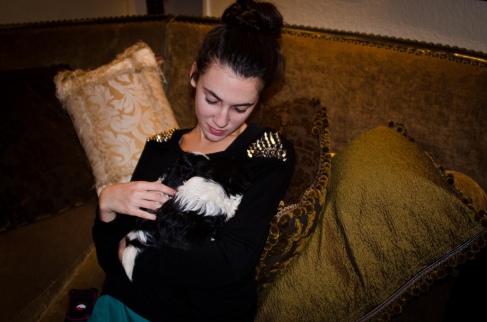 I believe I felt the earth move. For sure I know things have moved around in the Buxton home in Crestline. We have papers on the floor, a box with soft towels, a basket with soft towels, puppy shampoo, Purina Puppy Chow, a purple chew toy, a red bow tie collar (that is too big, so I’ll show you later), a little water bowl, and a puppy food bowl. And snuggled up at this moment in front of the blazing fire in our living room is Sir Winston (Buxton) of Crestline. He is six weeks old and weighs 32 ounces. I’m in love. (Don’t tell anybody, but at the moment I hear Pappy talking baby talk to Sir Winston. He tries to be an old meanie about little dogs, but I know the truth: He is in love too!)

Still full of life and ready to be on the move, Shirley at 84 years old feels blessed to have lots of energy and to be full of optimism. She was married to Jerry for 63 years, and grieves yet at his death in August of 2019. They have 4 children, 13 grandchildren and 11 great-grandchildren...all beautiful and highly intelligent--of course. :)

10 replies on “Sir Winston of Crestline”

There is nothing like a new baby to add to the family, whether it be animal or the human kind, they both bring joy to our lives. He’s a cutie! Enjoy! 🙂

This post is so sweet. I love your new baby’s name – such a profound name for such a cute guy and his new parents!!! Thanks for sharing!

I am so happy for you Shirley. And for Chloe too. I hope Andrew’s family will be able to take good care of their new pup. Papa Bill and I have talked about a dog once in awhile but we, too, think it would be too much trouble for us. Yard is not fenced. Shots and food would be expensive. But, who knows………never can tell. Love you all.

I am so jealous!!! My daughter just got the cutest puppy and I fell in love!!! I told my hubby I want one and he is just a fuddy daddy!! He told me all the reasons why we don’t need a dog!!! Say a prayer for me!!!
By the way your puppy is so cute!!! Enjoy!!!

Every home needs a Dog-Member.

To cute sister buxton, and a good name, its like having a new baby in the house have fun spoiling him.