Even though one of their characteristics is a certain ebb and flow, it is important to maintain them lest they be lost, for once completely unraveled, the knitting back into form may be difficult. Constraints of time and various responsibilities will push against their keeping.

From the relationship laughter will result. So will tears.

Jerry and I have been at this one–this friendship–for about 65 years. At least segments of our friendship with the Stevensons and the Hodges have been that long-lasting, for Jerry and Johnny Hodges met when they were still in high school. Our friendships are sterling, and on Friday they drove up from San Diego and spent the night with us. 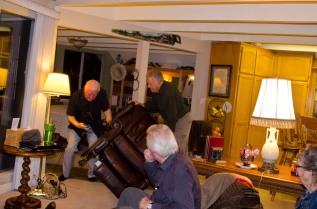 Johnny lost his phone, so strong man Jerry tipped over the chair where Johnny had been sitting, and there underneath was the phone.

Nita wasn’t able to come as she had gone to northern California to visit with her sisters. To punish her we almost planned a dinner engagement at her house…but being the sweet friends we are, LaVelta and I had mercy on her and didn’t mark anything on our calendars.

I’m above tattling on anyone, (by name) but the two diabetics in the group refused the sugar-free ice cream and strawberries I had prepared, and licked up instead wide wedges of lemon meringue pie.

Lavelta leaned toward me across the table where we lingered after breakfast on Saturday morning and said, 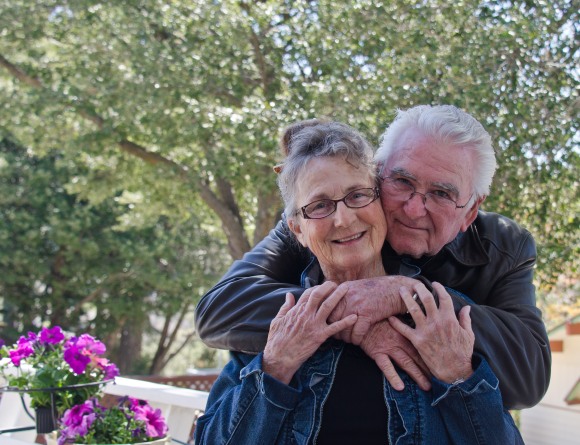 We talked into the night of our families, our churches, vitamins, and antibiotics. One of the diabetics injected the other with insulin. I grinned. We ate, and drank iced tea and pots of coffee and spoke of Boston and general conferences over the decades, and one rolled his eyes heavenward as he recounted the long waits on the other. Financial reports, board meetings, and the Mary Kay in St. Louis. Jerry and Berl argued about exactly where they were when Jerry prophesied about a certain sort of private matter. 🙂 We talked about holy living and doctrine and motor homes, and about missing Brother Gray. Lavelta showed me pictures on her phone, and from a table I picked up a picture of Nathaniel and showed her how handsome he is, and I bragged about his goodness. Lavelta spoke with pride of the three Manzano children and how involved in the work of God they are. We talked of progress and of dangerous regression. We asked rhetorical questions and pontificated at length on answers. 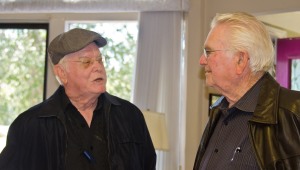 We spoke of strokes and of dishes and of souvenirs from our trip to the Philippines, and Berl played with magnets we had bought once on a trip to Silverton, Colorado. We spoke lovingly of Sam and Lil White and I reminded them that Sister Francis had recently celebrated her 100th birthday.

I recalled that from both these men who visited in our home I had heard profound preaching. . . . and I added in Jerry, and excuse me . . . you may want to tune out for a minute, but I knew I was sitting in the presence of three holy exceptional men.

Johnny slept late, and as Stevensons and Jerry and I lingered over breakfast, Berl picked up my Bible which lay close and prepared to read Ephesians 4:32. “This is my life goal now,” he said. “This is how I want to be.” “And be ye kind one to another, tenderhearted, forgiving one another, even as God for Christ’s sake hath forgiven you.

I lined them up on the deck for one last picture. We had prayed inside, our hands joined.

18 replies on “The Luminance of A Durable Friendship”

[…] situation was this: Quarterly, we three couples–friends for most of our adult lives–rotate to our homes where we share dinner, and a […]

[…] and me, as she did also the Stevensons who had pulled up behind our car. We had been invited to dinner with our friends at the Johnny Hodges […]

Oh sis Buxton, as I read this post I wished I was there too!! What I would covet the most would be the words of wisdom from these great men of God, that naturally flow untethered from their hearts, because of the deep love and adoration they have for the Master they serve. I am a new visitor of your site, I am currently reading your book “Link to Excellence” and found this site’s invitation this morning on the back cover. I wanted to thank you for opening the door each day to those who “choose to enter”.

What a precious post. I am so very sorry that I am just now seeing it–so many months after you wrote these great words. Welcome to my site. I’ll try to be a better hostess from here forward!

Sister Buxton, this post is so sweet! Makes me want to cry. I am grateful for the treasure you have of these longtime friends – and I’m sure they appreciate the pictures you took and the kind words you wrote! Love your writings!

Sister Mills, you are very sweet yourself. I count myself blessed to call you a friend. My love and concern.

Rebecca whom? Rebecca, my daughter? 🙂 I must give you a couple of computer lessons….

Priceless and treasured, is a friend . So cool… So blessed….

Oh….. nothing as sweet as OLD FRIENDS. You are certainly richly blessed with friends…and to think..I am included! Wonderful Post!

Dean! This makes me so happy! You definitely are included in our great group of friends.. Please come see us and we can laugh and talk and eat and cry and pray . . . then do it all over again!

Beautiful recollections, Sister Buxton! Thanks for sharing this ‘stuff’ that Life is made of: Relationships!!

You “nailed” it. Thanks for your visit here, and for your insight. Blessings…….

Enjoyed the visit and playing nursemaid to Johnny and giving him his shots. Hope to get together soon for we don’t have much time…..HaHaHa!,!!!! Berl

You stunned me with your willingness (?) to play nursemaid, and when I saw you with that needle, I couldn’t believe my eyes. Great visit……..love.

What a fun time we had!! It was wonderful being in the mountains with you and Jerry. We enjoyed ourselves from the moment we arrived. Berl was so looking forward to your delicious dinner that he walked straight into your house and sat down at the table, fork in hand. Roast, mashed potatoes, homemade rolls, asparagus, followed by lemon meringue pie was more than he dreamed of. Absolutely delicious!!! You and Jerrry are so warm and hospitable. You make everyone so comfortable. Thank you for being our friends. Lavelta

Thank you for your kind remarks, Lavelta. Love you and Berl so very much. Loved your visit!

Sis, Buxton, I just now read this and it made me feel so wonderful inside. Thank you. 🙂

Tena, friends–the long-lasting, enduring ones–are priceless. I sense you recognize that. Thank you for reading and commenting.

Such a beautiful post about some beautiful and precious people! Thank you for sharing……=)

Good morning, Summer. Thank you for reading here and for taking the time to comment. Of course, you know about these exceptional people. …..love

Bro Stevenson raised me from the time I was 2 years old in this precious faith. For nearly 31 years, I considered him my Pastor. I now live in Virginia and seeing pictures of him and Sis. Stevenson makes me homesick. 😉 However, it also reminds me to hold dearly on to the precious lines and precepts he taught me as a child and young adult. I love them very much and will always do so.

What a precious response, Tasha. How privileged we are to know these great people. Blessings……

Sis. Shirley, you mentioned talking about Bro. Gray. He was very precious to me. He was the one who showed me, through scripture, that I could rest assured about marrying again because of the circumstances of my first. Loved the pictures and report of your visitors. Love you……………………Esther

Hello, Esther. Thank you for taking the time to post here. And yes, I certainly agree about Brother Gray. He is a legend and deserves every bit of honor he has been awarded. ……..love.

Sis Shirley. You mentioned Bro. Gray. He was very precious to me. He was the one who showed me, in scripture, that I could rest assured about marrying a 2nd time, because of the circumstances. I will always be grateful to him. A wise man.