Brother O’Bryan gets off work at 12:30, and it was a little past 1:00 when they picked us up at our motor home for the trip to Tombstone. We were all still very concerned about the fires, and as we began the short trek to the historic town, we observed that the skies were darkening, giving the 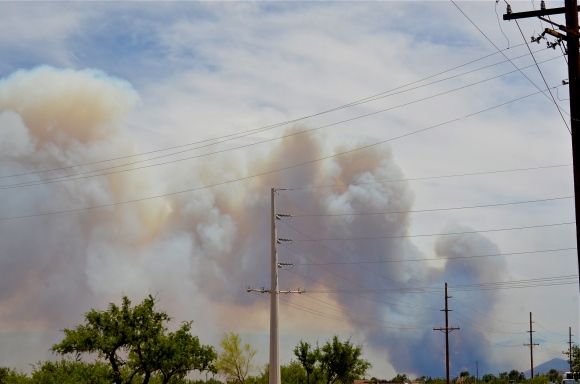 appearance that the fires were escalating. Jerry and I had been out earlier, and the skies had actually looked better than they had the day before. Now it appeared that something had changed. The winds had increased, with gusts up to 40 mph.

The O’Bryan’s daughter, Amber, and her husband had been on stand-by for evacuation for several hours. As we traveled in the car both the O’Bryans were receiving updates from their daughter and from other people in their church concerning the situation.

“Please,” I told them. “If this is not a good time to go to Tombstone, let’s just turn around and go back. We can always go later.”

But they insisted, saying there was really nothing they could do at that point, but should things change, we would immediately head back to Sierra Vista.

We made it for the 2:00 o’clock re-enactment of the shoot-out at the O.K. Corral, after which we went into a couple

of other museum areas, and walked about a bit. Then the call came: “Mom, we’ve been ordered to evacuate.” Later we learned that propane tanks were exploding, and one service station had gone up in flames.

It was not a hard decision: We picked up our souvenir newspapers for which we had tickets and headed toward the car. We would visit more of Tombstone another day.

Sister O’Bryan had a roast cooking in her crockpot, and they insisted we go with them to their home. “I had planned all along to have you for dinner. Please come.” So, we went to their lovely home, the prized point of which is their enormous backyard. Tomatoes, squash, okra are among those vegetables growing in their garden. A couple of fountains were spraying, and one tree called a Desert Willow had beautiful pink blossoms on it. Amber and Matt had safely arrived and after we had admired the beautiful yard, we went inside and all indulged in the delicious meal.

As we were finishing up the dishes, Brother O’Bryan suggested we drive to the edge of town and check on the progress of the fires, which we did, although we really couldn’t tell too much. The skies were magnificent, and once when I wanted to pull over to get a shot, someone suggested we drove onto the post of Fort Huachuca to a certain hill that would give great views, not only of the evening skies, but of the fires. We showed our ID, and were admitted to the Post, but the road to the scenic hill site was closed. We theorized it was because it faced toward the fires.

We drove through the Post, past modern houses, and historic structures that are more than 100 years old. Generals live here as do PFCs. Children were running about, riding bicycles and playing with their animals. We saw deer and jackrabbits. The evening light was fading as we pulled up at the cemetery and got out to look around. It was a moving moment for me as I gazed at the rows of white tomb stones and considered that people unknown to me have made great sacrifices that benefit my family and me. I am grateful.

Still full of life and ready to be on the move, Shirley at 81 years old feels blessed to have lots of energy and to be full of optimism. She was married to Jerry for 64 years, and grieves yet at his death in August of 2019. They have 4 children, 13 grandchildren and 11 great-grandchildren...all beautiful and highly intelligent--of course. :)