The baby had been born, Steve said, but with a hole in his heart, and they weren’t sure of anything. Within hours Jerry had flown to Louisiana to be with our son, his wife and the baby. Our daughter was critically ill, so I was not able to go with him.

They transferred Joel to a superior hospital: Through the touch of Jesus, and the ministration of human doctors, the flaw resolved itself, and within a short time, Joel Buxton was declared perfect.

Now, on Saturday, July 26th, 2008, with a wife and three small boys of his own, Joel was ready to be installed as pastor of Calvary Pentecostal Church in Carson City, Nevada.

“Pappy, will you be able to come to my installation service?” Joel had asked on the phone many weeks before, but Jerry wasn’t sure. “Well, I hope you can come. I want you to be a part of it.” 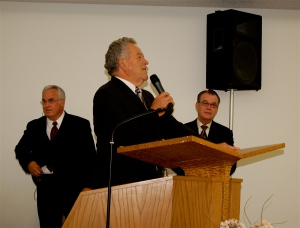 Jerry opened the service with prayer, read from his Bible: “Children’s children are the crown of old men:…” then turning to Joel, addressed him. “You are my crown, Joel. I am intensely proud of you.”

The preliminary part of the service was kept short, and the first speaker, Randy Keyes, preached a profound sermon on the subject, “The Call, the Preparation and the Sending.” Joel then took the pulpit, welcomed everyone and told of his reasons for choosing these particular men for this significant occasion. When he was quite young, at specific and memorable times, both Randy Keyes and Floyd Odom had uniquely ministered to Joel.

“The Anointing,” was Floyd Odom’s subject, and from Old Testament scripture, he expounded on the composition of anointing oil, pointing out that “things” were first sanctified, then were the men–the priests–anointed. As Rev. Odom preached, he lifted a

“Come,” Rev. Odom spoke to Steve, Joel’s father. “Come, as I preach and lay hands on your son and anoint him.” It was a powerful and moving gesture as the father anointed the son, and as the grandfather watched. From their loins had come this excellent young man. 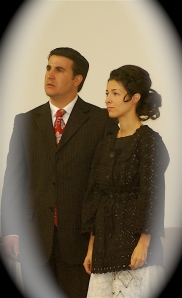 “Join your husband here, please,” Rev. Odom spoke to Aisha, and as the couple stood, he charged them to do the work of a pastor and a pastor’s wife, to defend truth, to be just and wise.

Steve concluded the service, calling forward all ministers and their wives to speak a corporate prayer for Joel and Aisha. Standing at that altar were three generations of Buxton pastors: Jerry, Steve and Joel.

And so it was finished…but only has it begun. From the calling, through the preparation, the sending, and now the installation, Joel Buxton had progressed, and, in the long line of God’s will, had taken his designated place.

At some unknown moment, and in an unfathomable way –timeless and separate from eternity–Almighty God formed Joel, a distinct, eternal soul. One day, faithful to His Design, God bent over and summoned His servant: As unmistakable as is lightening on a summer day, so was the beat of Divine as Joel sensed the quickening of The Call. Stripping himself of personal ambition and of secular choice, he bowed in submission to God’s eternal plan.

And who would not? Who, once called, would refuse the dedicated path of bonded servant to Almighty? Who could ignore such rarified opportunity? For in place of lowly

is the elevated, in exchange for decadence is the righteous, in trade for chains come ethereal freedoms; an orchestrating, a brokering, an unimaginable exchange, a joining of God and man.

18 replies on “Beyond The Call”

Todd, what a wonderful Christmas present: to hear from you.

Please let me know everything that is going on with you–either here on my blog, or by email.

Blessings, and a joyful, merry Christmas.

Sister Buxton,
Wow that was very moving, You let Joel know I am praying for him and his family. I am so excited to know that revival is happening. it’s starts with Men answering the call of God, without a preacher who will know salvation? This is my email lets keep in touch. I have it on my hip all the times so don’t hesitate.

You and Jerry must be extremely proud!!!!!

Please tell Joel his great uncle wishes him all the best.

How truly awesome and what a legacy. Thanks for sharing. It is inspiring.

Love and miss you!

Have fun at camp meeting.

We are so excited for Joel and Aisha! We love them both and are so glad to have them as long time friends!

Sis. Buxton, Yes! I will be at Camp Meeting. Wouldn’t miss it for the world. I love it. I look forward to seeing you and Bro. Buxton. 🙂

This is beautiful Sis. Buxton. It brought tears to my eyes. Thank you for sharing. I love Joel and Aish much and am excited to see what God is doing in their lives.

Thanks VONNIE, DEBBIE, and JOLENE for your prayers and kind thoughts.

A column I must write sometimes would concern the wives of preachers (and other leaders.) It’s interesting to consider whether or not they are particularly “called,” or is it that that their husband’s calling to the ministry has placed them where they are?

Whatever the answer to that, with no hesitation I acknowledge the awesome wife Joel has. Aisha is beautiful, had a sweet spirit, is quite talented, plays the piano and sings, and is an unusually good mother.

As I read this I thought to myself, there are many things we pass down to our children. But oh the beauty that has been passed down from generation to generation starting from your husband, to your son, then to your grandson. Such humble men selling out their will over to the will of God to the call of the ministry upon their lives.

I was so moved when reading this Sis Buxton. It doesn’t stop there. For standing next to these great men are great women backing these men in their work for the Lord. The pictures speak volumes. You can see the dedication to God on Aisha’s face as well as Joel’s.

You have every reason to be proud! God has truly blessed you.

Sounds like an awesome service! I know they will do a great work there. I agree with Ronda. . .Joel has a great heritage. Thanks for sharing. See you at camp meeting next week!

Thanks for sharing the wonderful pictures and highlights of the installation service. God Bless Joel, Aisha and the boys too! Much love, Vonnie 🙂

Ronda–probably the best installation service I have ever attended.

Will I see you at camp next week?

What a great heritage Joel has. I know he and Aisha will do a great work in Carson City. It sounds like they had a wonderful service. 🙂

CAROL, thank you for your good wishes for my children. I am so thankful for their dedicated lives.

MELISSA, welcome to my blog. I look a short wander to yours and will return to read more. Looks great.

I believe that scripture is Proverbs 17:6, but I didn’t look it up and that might not be exactly right.

I’ve just recently found your blog and love it so. It blesses me.

…”children’s children are the crown of old men”….I LOVE IT!

[…] our son, his wife and the baby. Our daughter was critically ill, so I was not able to go with himhttps://writenow.wordpress.com/2008/07/28/beyond-the-call/Prayer – Wikipedia, the free encyclopediaPrayer is the act of attempting to communicate, commonly […]

Glad you were able to be there for this great moment in the lives of your grandchildren. May God’s blessing be upon them as they follow His call.